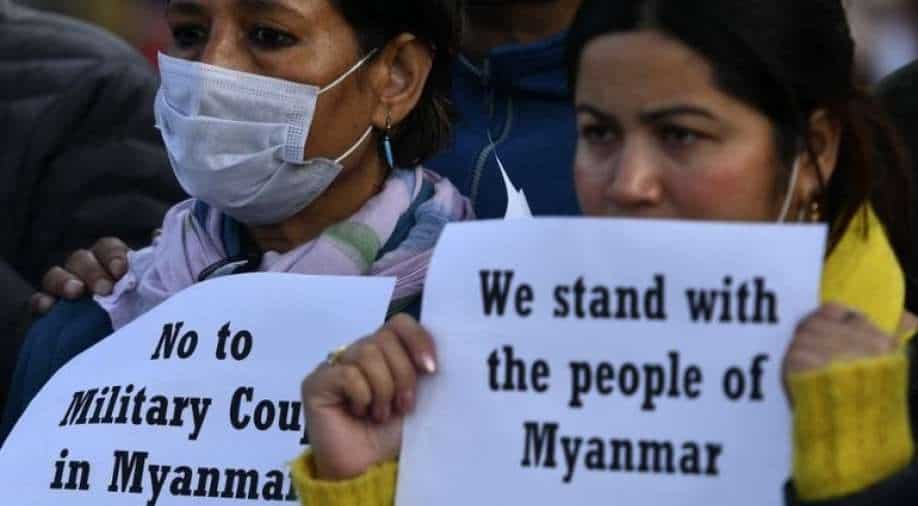 Protesters from the civil society hold placards during a protest in Kathmandu on February 1, 2021, after Myanmar's military seized power in a bloodless coup on Monday, detaining democratically elected leader Aung San Suu Kyi as it imposed a one-year state of emergency. Photograph:( AFP )

Minutes after the Myanmar military took control of the country for one year after the country's governing National League for Democracy (NLD) and detained the leader Aung San Suu Kyi and other senior members, several governments and political figures came ahead to condemn the military coup in the country.

The European Union chief Ursula von der Leyen took to Twitter to condemn the sudden takeover by the military and said, "I strongly condemn the coup in Myanmar."

"The legitimate civilian government must be restored, in line with the country's constitution & the November elections," she tweeted. "I call for the immediate & unconditional release of all those detained."

I strongly condemn the coup in Myanmar.

The legitimate civilian government must be restored, in line with the country's constitution & the November elections.

I call for the immediate & unconditional release of all those detained. https://t.co/YbIkxLZlve

An old ally of Myanmar, Australia, too, issued a statement expressing grief over the seizing of power by the military and said, "The Australian Government is deeply concerned at reports the Myanmar military is once again seeking to seize control of Myanmar and has detained State Counsellor Daw Aung San Suu Kyi and President U Win Myint."

"Australia is a long-standing supporter of Myanmar and its democratic transition. We call on the military to respect the rule of law, to resolve disputes through lawful mechanisms and to release immediately all civilian leaders and others who have been detained unlawfully," said Maris Payne, Foreign minister. "We strongly support the peaceful reconvening of the National Assembly, consistent with the results of the November 2020 general election."

The US, too, issued a statement condemning the arrest of the state counselor and the upheaval caused by it in the country. "The United States is alarmed by reports that the Burmese military has taken steps to undermine the country’s democratic transition, including the arrest of State Counselor Aung San Suu Kyi and other civilian officials in Burma," read the statement.

US President Joe Biden was also informed about the recent developments in Myanmar, "President Biden has been briefed by National Security Advisor Jake Sullivan. We continue to affirm our strong support for Burma’s democratic institutions and, in coordination with our regional partners, urge the military and all other parties to adhere to democratic norms and the rule of law, and to release those detained today."

Josep Borrell Fontelles, Vice-President of EU commission, also condemned "the coup carried out by the #Myanmar military and call for the immediate release of those detained," he tweeted. Talking about the importance of the election results, he lent support to the country, "Myanmar's people want democracy. The EU stands with them."

I strongly condemn the coup carried out by the #Myanmar military and call for the immediate release of those detained.

Election results and constitution must be respected.

Myanmar's people want democracy. The EU stands with them.

"It's simply outrageous .. We are talking about overturning a constitution by the generals, that the generals wrote, that they said ..they would obey by ..This is an assault on democracy itself, on the people of #Myanmar," said UN Special Rapporteur Tom Andrews.