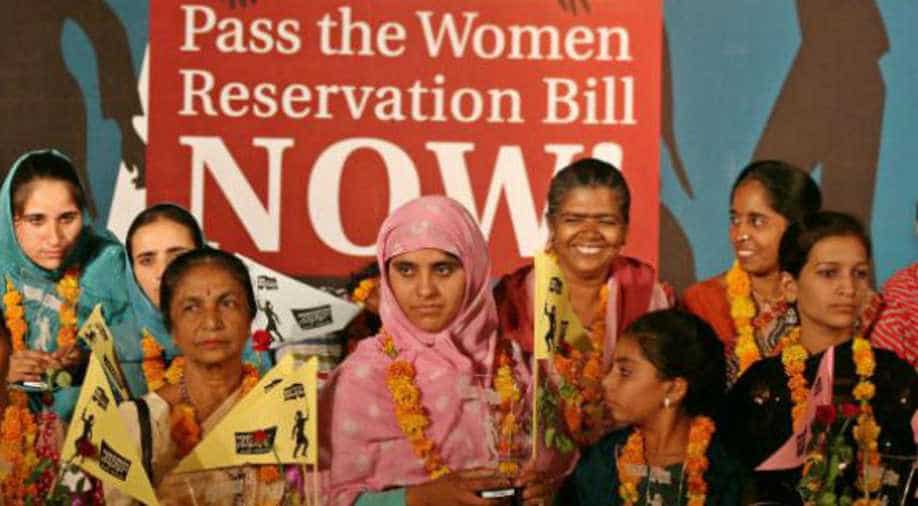 With Absolute Majority in Lok Sabha and state assemblies, NDA government must not delay the Women's Reservation Bill Photograph:( DNA )

In 1992, the enactment of the 73rd and 74th constitutional amendments by the Government provided for one-third representation of women at the village, district and block levels. This was a huge success and acted as a catalyst for transformative social change at the grassroots.

Thereafter, the women’s reservation bill was first tabled in the Lok Sabha in 1996 which proposed to similarly reserve one-third seats in the national parliament and state assemblies for women. The reserved constituencies were to be chosen by a draw of lots and each constituency was to be reserved for women representatives once during every three general elections (15 years). There is also a provision for sub-reservation of one-third seats for SC and ST candidates within this quota.

The bill has had a long and turbulent history spanning two decades. Notable initial concerns related to the form of the bill (reservation of sub-categories) and the reluctance of elected representatives to relinquish power in a constituency which they had carefully nurtured, in case it came under the ‘reserved’ category that term.

Large numbers of women go out to vote nowadays yet their own chances to be allotted tickets are quite low.

After thorough scrutiny and adjustments by parliamentary committees, the bill has been tabled more than once, but its passage has been repeatedly stalled. Shamefully, it was even torn up in parliament on one occasion. An underlying patriarchal bias which does not deem women as deserving or competent, combined with a reluctance of current representatives to share power with women has prevented it from seeing the light of day. Despite setbacks, the women’s movement kept the pressure alive by organising public rallies, including a trans-India train journey to generate awareness for the bill. Their persistent efforts led to the bill being passed by the Rajya Sabha in 2010. The bill now awaits tabling and passage in the Lok Sabha. Thereafter, it also needs ratification in at least half the state legislatures.

Almost all political leaders have expressed their verbal support for the bill. Its introduction is keenly awaited. The bill is very important, symbolically and practically. Foremost, it is a testimony to the sheer grit and perseverance of Indian women. The women’s movement supporting this bill has been rock steady in its determination over a span of twenty long years to leave a richer legacy for women in the coming generations. Activists have faced several hurdles. Some of these stem from the very name itself.

‘Reservation’ is a misnomer as the bill is a fair attempt to have adequate parliamentary representation for fifty percent of the population in the country. In the absence of transparent or merit-based allocation of tickets by political parties, the bill seeks constitutional guarantees to ensure allotment of one-third tickets to women; they have to win the election to obtain the seat. Many self-respecting women have had to suffer the ignominy of being seen to be asking for favours when they are actually staking a claim to what is rightfully theirs in a democracy. With vision and foresight, these women advocate that increasing the number of women legislators would help many more gender issues to be highlighted and be resolved faster.

Women's Reservation Bill will put India in the forefront of the global movement towards achieving gender equality.

This bill, if passed, will put India in the forefront of the global movement towards achieving gender equality. What a refreshing change for a country which has had a dismal track record in areas like maternal mortality, gender equality indices, women’s empowerment and so on! Despite making a name for itself in scientific, literary and other fields, the gender-related inequities and prevalence of social evils have always dragged down the image of the country.
A chain is only as strong as its weakest link! India, though a signatory to gender rights treaties such as Convention on the Elimination of all Forms of Discrimination against Women (CEDAW), has so far not held itself to the requisite international standards.

The advocacy surrounding this bill has brought about tremendous social change and awareness over the years among women. It has encouraged women to explore leadership avenues with greater interest and is pulling them out of the ingrained mindset that ‘a woman’s place is only in her home' thus helping them realise their full potential. Women now feel confident about serving their country at the highest levels of decision-making.

With vision and foresight, these women advocate that increasing the number of women legislators would help many more gender issues to be highlighted and be resolved faster.

The need for the passage of this bill has also drawn civil society groups into the ambit of women’s issues, a trend of collaborative partnerships that had begun with Jyoti’s horrific gang rape in 2012. Today an all India national alliance for the passage of the women’s reservation bill exists which started out with seven NGO’s as ‘founding mothers’ and now has hundreds of NGO’s interlinked on this issue.

Passage of this bill would enable women to start reaping the rewards of their hard work. Currently, women perform over 70 per cent of the unpaid but critical work like producing food and nurturing families etc. but have little say in their own lives whether it be governance (a mere 11 per cent representation in the parliament), control over their own bodies and choices as well as ownership of property. Similarly, large numbers of women go out to vote nowadays yet their own chances to be allotted tickets are quite low.

An example of gender equality set at the highest levels would have high visibility and percolate down into the daily lives of the citizens. Social programmes run by the government would get a boost. As Swami Vivekananda put it, it would lead to ‘uplift of women and awakening of the masses’, which he deemed imperative for the country’s progress.

The bill must be passed soon. This will ensure that women’s long drawn struggle to find a place in the political sphere will gain momentum. We look forward to women forging ahead and scripting a new and more significant path for themselves and the country.