Women protest in Afghanistan's Herat over right to education, work 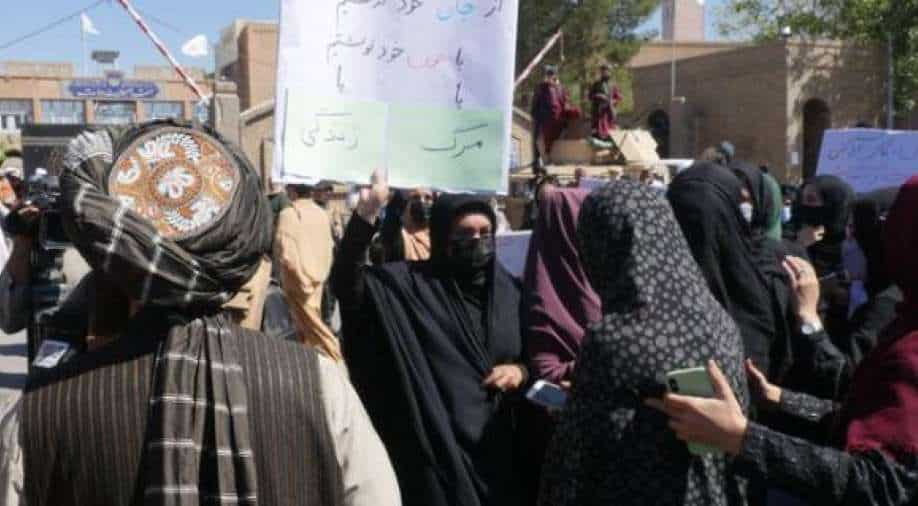 Senior Taliban leader Sher Mohammad Abbas Stanikzai had said that women may not find a place in the new cabinet.

Reports said women and university students in Herat held protests to ensure the preservation of achievements in the past 20 years as the Taliban cements its hold over Afghanistan.

Afghanistan's Tolo News reported the women appealed to the international community not to forget them as they took to the streets with placards.

There were at least 50 women involved in the protests reports said as the Taliban begins final preparation to form the government.

Senior Taliban leader Sher Mohammad Abbas Stanikzai had said earlier that women may not find a place in the new cabinet although they will be allowed to work.

Women protesters chanted "right to have education, work and security" while taking out demonstrations on the street. The Taliban had captured Herat last month after clashing with Afghan government troops.

Meanwhile, the Afghan TV anchor who had interviewed the Taliban as it came to power left the country during the US evacuation.

Beheshta Arghand said the Taliban has ordered her employer Tolo News to ensure women wear the hijab and had reportedly asked local media to halt reporting on their takeover of the country.

Beheshta left Afghanistan along with her mother, sisters and brothers. Her story on interviewing the Taliban had gone viral as she became the first Afghan woman journalist to interview the militant group.

The TV anchor said she had asked Afghanistan's famous activist Malala to help in the evacuation. Malala reportedly arranged to get her on Qatar's list of evacuees as Beheshta left the country.