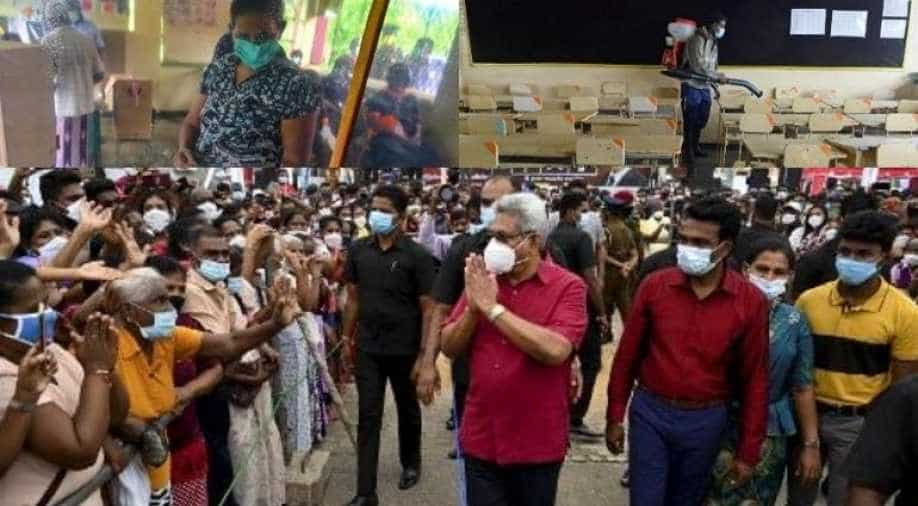 70 per cent turn out was recorded against 77.66 recorded during the last parliamentary election.

Sri Lanka is the first South Asian nation to go to polls during the pandemic as the country voted for a new parliament today. The election could change the political dynamics of the island nation.

The Lankan President Gotabaya Rajapaksa used his presidential powers to dissolve the parliament and called for snap polls.

70 per cent turn out was recorded against 77.66 recorded during the last parliamentary election.

Gotabaya Rajapaksa's party was a clear winner even before the polling booths opened as there was no compelling opposition.

The parties contesting against them are fractured. United National Party led by former prime minister Wickremesinghe and its breakaway group SJN s led by Sajith Premadasa. There are smaller parties like the Tamil National Alliance and the NPP.

7,452 candidates from 54 political parties contested for 225 seats in the Lankan parliament.

The key issue in the polls is Wuhan virus pandemic took a lot of space. Mahinda Rajapaksa's party may have earned brownie points for the government's handling of the Wuhan virus. Sri Lanka has fared much better than its South Asian neighbours.

The total number of COVID-19 cases is 2,834 as of this evening. The ruling party SLPP asked voters for a 2/3rd majority as, the said, Lanka needs a strong government. A 2/3rd majority for Mahinda Rajapaksa could seal the fate of democracy. The Rajapaksa will repeal the 19th amendment which reduced the power of the president. This was back in 2015. If his party gets an absolute majority, it is likely to extend the term of the president. It would also give the president tighter control of the judiciary.

The result will be you will have the Rajapaksas controlling the legislature, the executive and the judiciary. This would spell an end to the checks and balances that democracies are based on. If Mahinda Rajapaksa gets a 2/3rd majority, those seeking justice against war crimes can forget about it.

It is no secret that Sri Lanka is divided along ethnic and religious lines. There are the Sinhalese Buddhists and the Tamil minorities. The Buddhists are vote bank of the Rajapaksa brothers and account for 75% of the Lankan population. They support Gotabaya for his role in crushing the Tamil separatist movement LTTE. Gotabaya came to power by promising a more unified Sri Lanka. He has worked in the opposite direction since assuming power.

What does his victory mean for India?

A lot has been said about the Rajapaksa leaning towards China. Many of the Chinese infra projects began when Mahinda Rajapaksa was the president of Sri Lanka. He allowed two Chinese submarines to dock in Colombo in 2014.

However, going forward, the Rajapaksa brothers will try to strike a balance between India and China. India was the first country that Gotabaya visited after his victory in the presidential election. He has spoken highly of the Indian leadership.

The results will be out tomorrow.