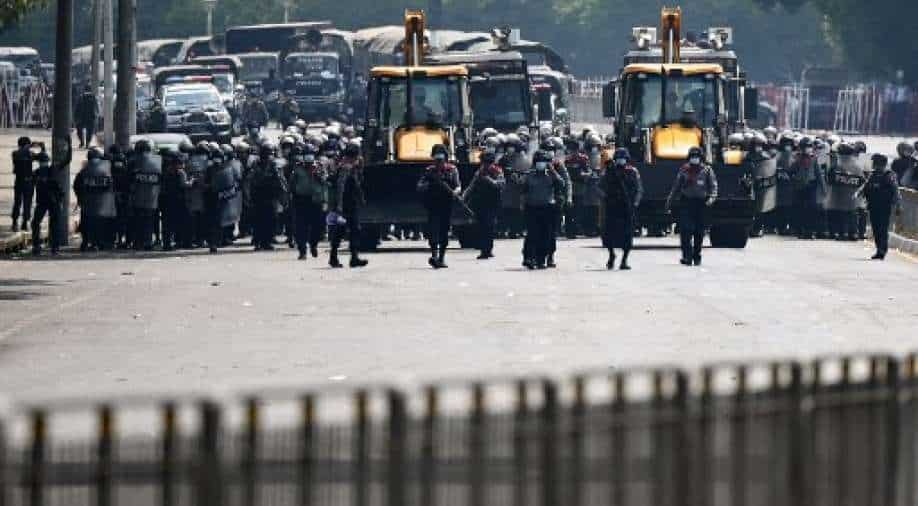 Police advance towards protesters demonstrating against the military coup in Yangon Photograph:( AFP )

The European Union stands steady to impose sanctions on officers responsible for the ouster and violence even as EU foreign policy chief, Josep Borrell called for a de-escalation of the current crisis in Myanmar

The United States said that it was blocking any US property and suspending the entry into the country of two members of the new ruling state administrative council General Maung Maung Kyaw, who commands the Air Force, and Lieutenant General Moe Myint Tun.

Blinken has also warned further action against those who perpetrate violence. Several nations are now seeking to impose sanctions directly on the members of the military junta in order to hold them accountable for the crackdown.

The European Union stands steady to impose sanctions on officers responsible for the ouster and violence even as EU foreign policy chief, Josep Borrell called for a de-escalation of the current crisis.

"Today, we have decided a set of targeted measures with ministers in response to these events. Then we took the political agreement to apply sanctions, targeting the military responsible for the coup and their economic interest. All direct financial support from our development system to the government reform programmes is withheld," Borrell said.

Meanwhile, after blocking the Myanmar military's official page, Facebook has further stepped up its action against the coup.

The social media giant has now taken down the pages of Myanmar's state-run television which is the military's mouthpiece. The move was undertaken against the TV page a day after it issued a warning threatening to take action against the anti-coup protesters.

On Monday, the United Nations chief Antonio Guterres also spoke against the use of brutal force in Myanmar. The UN chief said that coups have no place in modern society.

"I call on the Myanmar military to stop the repression immediately, release the prisoners and the violence, respect human rights and the will of the people expressed in recent elections. Coups have no place in our modern world. I welcome the resolution of the Human Rights Council, pledge to implement your request and express my full support to the people of Myanmar in their pursuit of democracy," Guterres said.