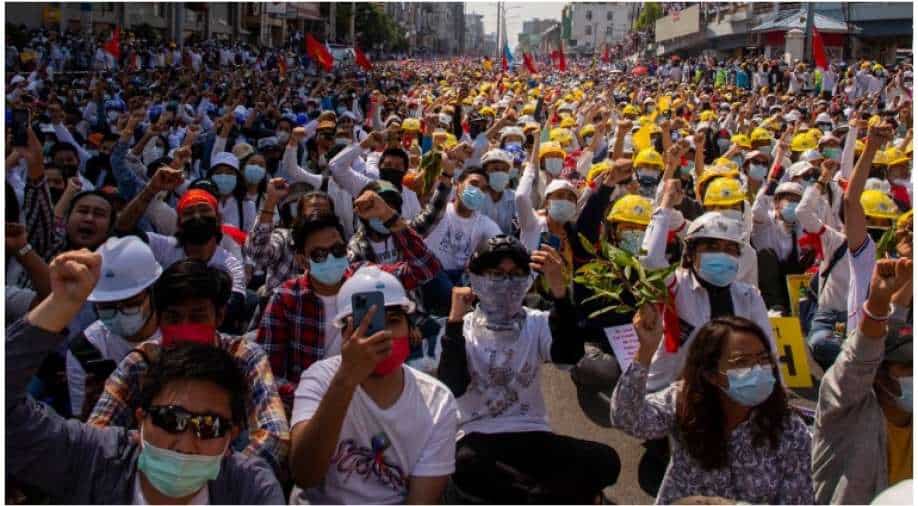 Protesters take part in a demonstration against the military coup in Mandalay on February 22, 2021 Photograph:( AFP )

Three people have lost lives so far. Two were shot dead in Mandalay on Saturday. Funeral of the third protester, a young woman, was carried out on Sunday. It drew hundreds of people

Anti-coup protesters on Monday defied military junta's warning to take to streets. Businesses around the country observed a general strike. There were protests in cities and towns across the country on Monday, from the northern hills on the border with China to the central plains, the Irrawaddy river delta and the southern panhandle.

Images posted on social media showed a police water cannon truck and numerous other vehicles closing in to break up a procession of chanting people in Naypyitaw, where the military is headquartered. As the protesters scattered, police on foot chased them, wrestling several to the ground.

"They're chasing and arresting us. We're just protesting peacefully," one woman said in video clip posted on Facebook.

The protests have been going on daily ever since the military toppled Aung San Suu Kyi's government on February 1. The military has been unable to stop the protests.

Three people have lost lives so far. Two were shot dead in Mandalay on Saturday. Funeral of the third protester, a young woman, was carried out on Sunday. It drew hundreds of people.

"Everyone is joining this," said San San Maw, 46, at the Hledan junction in the main city of Yangon, which has become a rallying point for the protests. "We need to come out."

In a country where dates are seen as auspicious, protesters noted the significance of the date 22.2.2021, comparing it with demonstrations on Aug. 8, 1988 when a previous generation staged anti-military protests which were bloodily suppressed.

Military's response so far has been less deadly. The army also said one policeman died of injuries in the protest.

"Today, I call on the Myanmar military to stop the repression immediately. Release the prisoners. End the violence. Respect human rights, and the will of the people expressed in recent elections," Guterres told the UN Human Rights Council in a pre-recorded video message.

Guterres has been increasingly vocal about situation in Myanmar.

Authorities were "exercising utmost restraint", the foreign ministry said in a statement. It rebuked some countries for remarks it described as flagrant interference in Myanmar's internal affairs.

Several Western countries have condemned the coup and decried the violence against protesters.

U.S. Secretary of State Antony Blinken said on Twitter the United States would continue to "take firm action" against authorities violently cracking down on opponents of the coup in the Southeast Asian country that is also known as Burma.

"We stand with the people of Burma," he said.