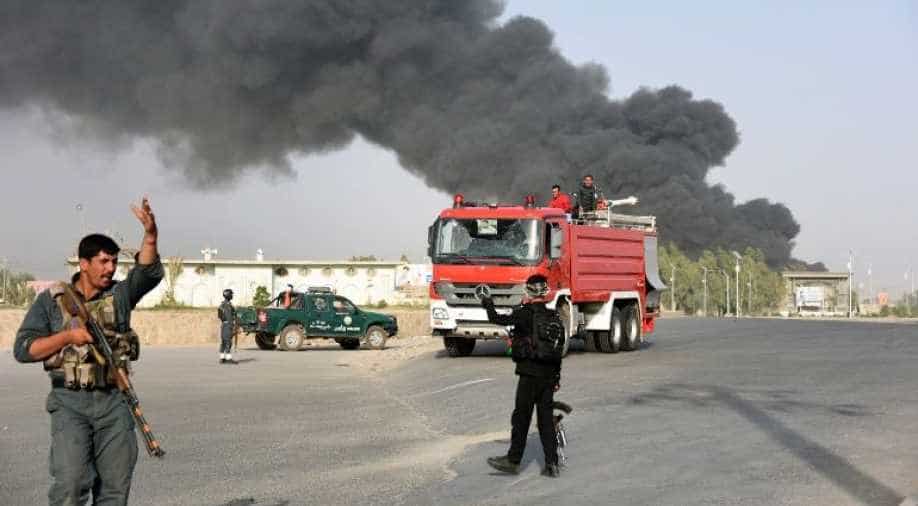 Afghan policemen arrive near a site of car bomb attack as smoke rises from the Police headquarters in Kandahar province. Photograph:( AFP )

The United States conducted airstrikes against Taliban positions in Afghanistan for the first time since the start of the Eid ceasefire.

USFOR-A conducted 2 airstrikes on June 4 to disrupt coord. TB attacks on ANDSF checkpoints, IAW the US-TB agrmt. We reiterate: All sides must reduce violence to allow the peace process to take hold. These were the 1st US airstrikes against TB since the start of the Eid ceasefire

“All sides must reduce violence to allow the peace process to take hold,” Leggett added.

The Taliban had earlier announced a ceasefire with Afghan forces which ended on May 26 as Eid ended.

The US had reached a deal with the Taliban in February ensuring it would pull its troops from the country in return for security guarantees, however, the Taliban and the Afghan government have been at loggerheads with each other.

Although under the agreement the US and Taliban were supposed to refrain from attacking each other but the US had said last month that it would conduct "defensive strikes" against the Taliban if they attacked Afghan forces.