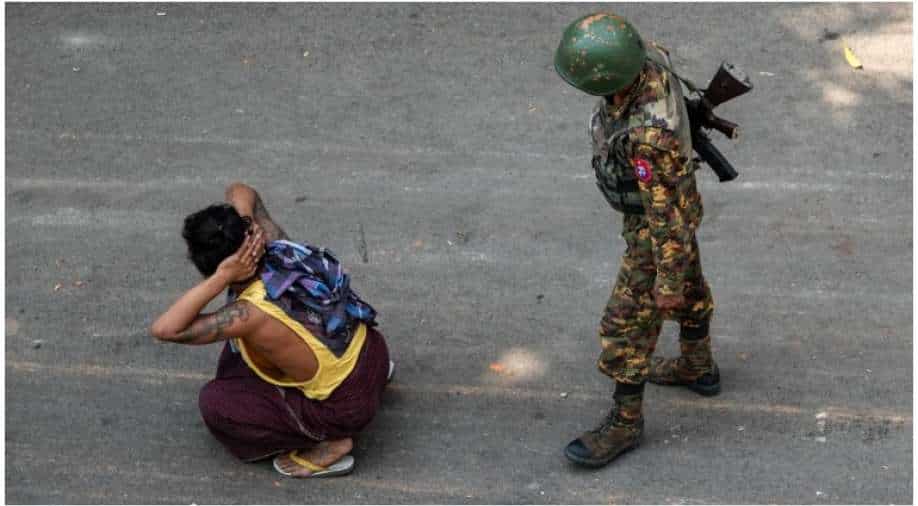 A soldier stands next to a detained man during a demonstration against the military coup in Mandalay on March 3, 2021 Photograph:( AFP )

Myanmar military junta has so far ignored the global condemnation, responding to the uprising with escalating strength

International criticism against Myanmar military junta got fiercer on a day that was the bloodiest so far amid pro-democracy protests in the country. United Nations said that at least 38 deaths occurred on Wednesday ( March 3). This has brought the death toll to 50. Myanmar has been on the boil ever since military junta toppled civilian government headed by Aung San Suu Kyi on February 1. The daily protests have seen a brutal response from the military lately who is violently cracking down against nationwide protests.

"Only today, 38 people died," UN envoy to Myanmar Christine Schraner Burgener told reporters on Wednesday. She added that many more have been wounded.

The criticism is growing.

Western powers have repeatedly hit the generals with sanctions, Britain has called for a United Nations Security Council meeting on Friday, and after Wednesday's deaths, the United States said it was considering further action.

But the junta has so far ignored the global condemnation, responding to the uprising with escalating strength.

Myanmar violence left the US "appalled and revulsed".

"We call on all countries to speak with one voice to condemn the brutal violence by the Burmese military against its own people," said US State Department Spokesperson Ned Price.

France called for "the immediate end of the repression in Myanmar", and release of all those who are detained.

"We are by your side," Macron tweeted

Even Pope Francis expressed his displeasure over what was happening in Myanmar. He renewed his call for release of political prisoners and said that hopes of the people of Myanmar could not be 'suffocated by violence

Wednesday's violence came on the heels of news that six Myanmar journalists would be charged under a law prohibiting "causing fear, spreading false news, or agitating directly or indirectly a government employee", according to their lawyer Tin Zar Oo.

Among them is Associated Press photographer Thein Zaw, who was arrested Saturday as he covered an anti-coup demonstration in Yangon. Video emerged on Wednesday of him being held in a chokehold by police as he was handcuffed.

The other five are from Myanmar Now, Myanmar Photo Agency, 7Day News, Zee Kwet Online News and a freelancer. They face up to three years in jail.

The United States called for their release and was "forcefully making clear" that their detention was "unacceptable," Price said.