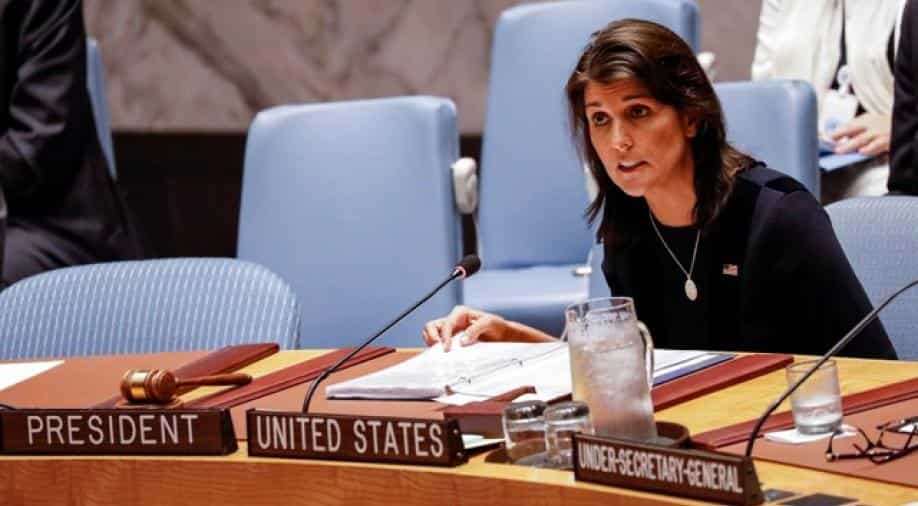 US Ambassador to the United Nations Nikki Haley speaks during a United Nations Security Council meeting about implementation of sanctions against North Korea at U.N. headquarters in New York City, US Photograph:( Reuters )

Haley said the United States would give an extra $185 million, of which $156 million would go to refugees and host communities in Bangladesh.

Haley said the United States would give an extra $185 million, of which $156 million would go to refugees and host communities in Bangladesh, taking its total humanitarian aid for the crisis to nearly $389 million in the past year.

Over 700,000 Rohingyas crossed the border to Bangladesh after a Myanmar military crackdown unleashed in the western state of Rakhine last year.

UN-mandated investigators have said the military carried out mass killings and gang rapes of Rohingya with "genocidal intent." Myanmar rejected the findings as "one-sided" and said it was a legitimate counterinsurgency operation.

Meanwhile, a US government investigation has found that Myanmar’s military waged a "well-planned and coordinated" campaign of mass killings, gang rapes and other atrocities against the Southeast Asian nation’s Rohingya Muslim minority.

The US State Department report, reviewed by Reuters ahead of its expected public release on Monday, could be used to justify further US sanctions or other punitive measures against Myanmar authorities, said US officials.

The findings resulted from more than a thousand interviews of Rohingya men and women in refugee camps in neighbouring Bangladesh, where almost 700,000 Rohingya have fled after a military campaign last year in Myanmar's Rakhine State.

“The survey reveals that the recent violence in northern Rakhine State was extreme, large-scale, widespread, and seemingly geared toward both terrorizing the population and driving out the Rohingya residents,” according to the 20-page report. “The scope and scale of the military’s operations indicate they were well-planned and coordinated.”