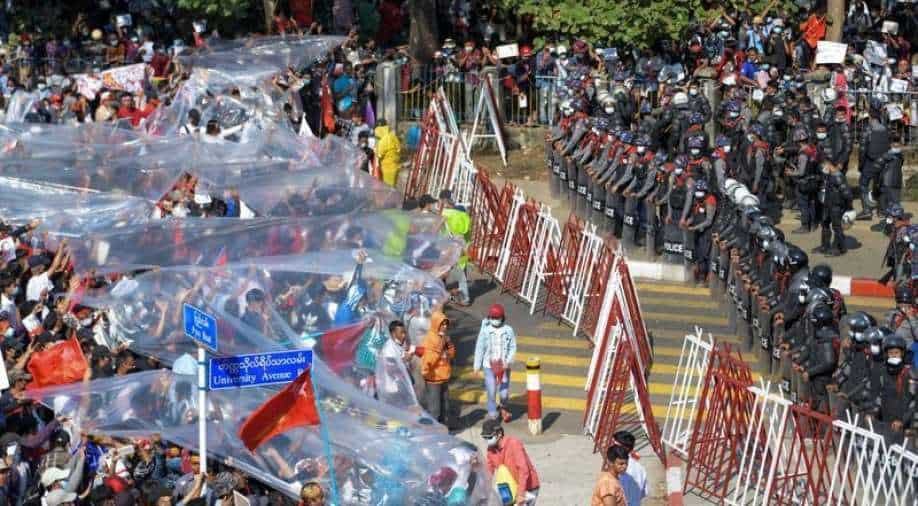 The draft resolution, to be debated during a special session of the Human Rights Council on Friday, also called for the release of all others who have been "arbitrarily detained", and called on the military to refrain from violence against peaceful protesters.

The draft resolution, to be debated during a special session of the Human Rights Council on Friday, also called for the release of all others who have been "arbitrarily detained", and called on the military to refrain from violence against peaceful protesters.

The text was trailed after a sixth consecutive day of anti-coup rallies in Myanmar condemning the ousting of civilian leader Aung San Suu Kyi, who until the coup on February 1 was the country's de facto civilian leader.

She was detained with dozens of other members of her National League for Democracy party, including President Win Myint, ending a decade of civilian rule and triggering international condemnation.

Britain and the European Union on Monday issued an official request for a special council session about the Myanmar situation.

The request has received support from more than 20 of the council's 47 members, easily passing the required one-third threshold to push the session through.

In addition, it was backed by some 30 other countries, including the United States, which announced Monday it would "re-engage" with the council nearly three years after the administration of former president Donald Trump decided to withdraw.

The draft resolution presented Thursday had slightly stronger wording than an initial text circulated to diplomats on Tuesday.

It called for "the restoration of the democratically-elected government," and demanded the "immediate and unconditional release of all persons arbitrarily detained, including State Counsellor Aung San Suu Kyi and President Win Myint."

The text also called for the "immediate and permanent lifting of restrictions on the internet, telecommunication and social media", as well as "full and unrestricted access" to the country by UN rights observers.

The draft meanwhile stopped short of calling for sanctions against the generals behind the coup -- something Washington has said it will do, and Britain said it was considering.

Observers suggested stronger positions may have been avoided in the text to ensure more support in the council, where consensus backing is preferred.

"We do think there is real value if we can get a broad and ideally unanimous voice out of the council sending a strong message, and there are some very strong messages in that resolution," a Western diplomat said, requesting anonymity.

But, the diplomat added, there were limits to how far backers of the text were prepared to go to secure support.

"The text has to be credible. It has to be sufficiently strong, and we are not going to go for consensus at all costs."

The one-day special session, which will be largely held virtually due to pandemic restrictions, is due to kick off at 10:00am (0900 GMT) Friday.