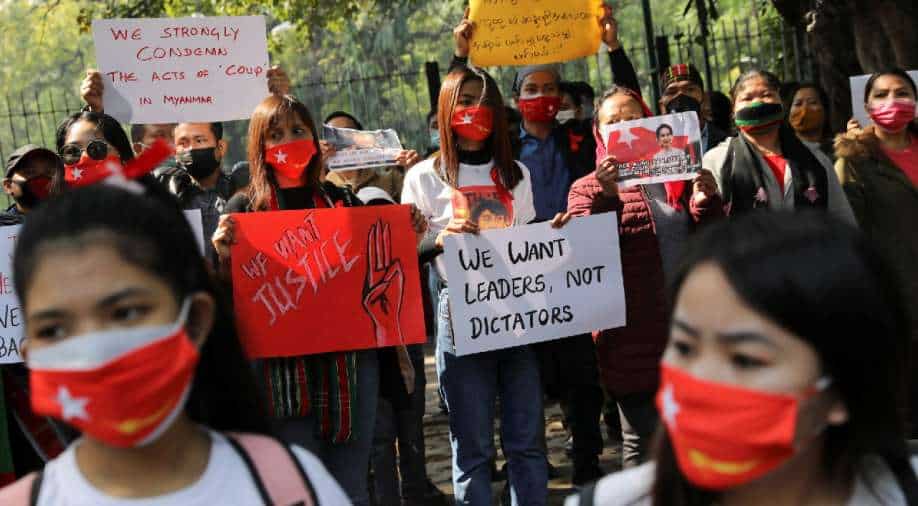 At least 38 people died on Wednesday, according to the United Nations, when online images streamed out of Myanmar showing security forces firing into crowds and blood-covered bodies of protesters with bullet wounds in their heads.

At least 54 people have been killed and over 1,700 detained since Myanmar's February 1 coup, the UN rights chief said Thursday, demanding that the military halt its "vicious crackdown".

The comments come after the deadliest day of protests in Myanmar, with at least 38 dead Wednesday in rallies where security forces were seen firing into crowds.

"Myanmar's military must stop murdering and jailing protesters," she said in a statement.

"It is utterly abhorrent that security forces are firing live ammunition against peaceful protesters across the country," she added.

Bachelet added that she was "also appalled at the documented attacks against emergency medical staff and ambulances attempting to provide care to those who have been injured".

The UN rights office said it had corroborated information that at least 54 people had been killed by police and military officers since February 1.

"The actual death toll, however, could be much higher as these are the figures the office has been able to verify," it stressed.

The killings have escalated sharply in recent days.

The rights office had verified 30 of the 38 deaths reported by other UN entities on Wednesday, saying the killings by security forces had taken place in Yangon, Mandalay, Sagaing, Magway and Mon.

"Many of the arbitrary arrests and detentions that have been carried out since February 1 may constitute enforced disappearances," Bachelet warned, calling for the immediate release of all those who remain arbitrarily detained.

She also expressed alarm at the targeting of media workers, with at least 29 journalists arrested in recent days, eight of whom had been charged with crimes, including inciting opposition or hatred of the government and attending unlawful assemblies.

"I urge all those with information and influence... to support international efforts to hold military leaders accountable for the serious human rights violations that have been committed both now and in the past," Bachelet said.

"This is the moment to turn the tables towards justice and end the military's stranglehold over democracy in Myanmar."

Also on Thursday, defiant anti-coup protesters returned to cities and towns across Myanmar after dozens of people were killed in the deadliest day of the junta's crackdown, with global powers condemning the "brutal violence".

At least 38 people died on Wednesday, according to the United Nations, when online images streamed out of Myanmar showing security forces firing into crowds and blood-covered bodies of protesters with bullet wounds in their heads.

Myanmar's military staged its coup on February 1, ending a decade-long experiment with democracy and triggering a mass uprising that the junta has increasingly sought to quash with lethal force.

More than 50 people have been killed since the military takeover, UN envoy to Myanmar Christine Schraner Burgener told reporters.

On Thursday, protesters hit the streets again in Yangon and Mandalay, the nation's two biggest cities, as well as other towns that have been hotspots for unrest.

The junta has sought to hide its crackdown from the rest of the world, choking the internet and banning Facebook -- the most popular social media platform.

Six journalists were also arrested on the weekend and charged under a law prohibiting "causing fear, spreading false news, or agitating directly or indirectly a government employee", according to their lawyer Tin Zar Oo.

One of the first people detained at the start of the coup was Aung San Suu Kyi, the head of the civilian government and a heroine for most people in Myanmar for leading the resistance against the previous dictatorship.

Suu Kyi's National League for Democracy won elections in November last year by a landslide, a result that set the stage for the military's influence to be potentially diluted.

"We call on all countries to speak with one voice to condemn the brutal violence by the Burmese military against its own people," he said, referring to the country by its former name.

French President Emmanuel Macron called for an "immediate end of the repression in Myanmar".