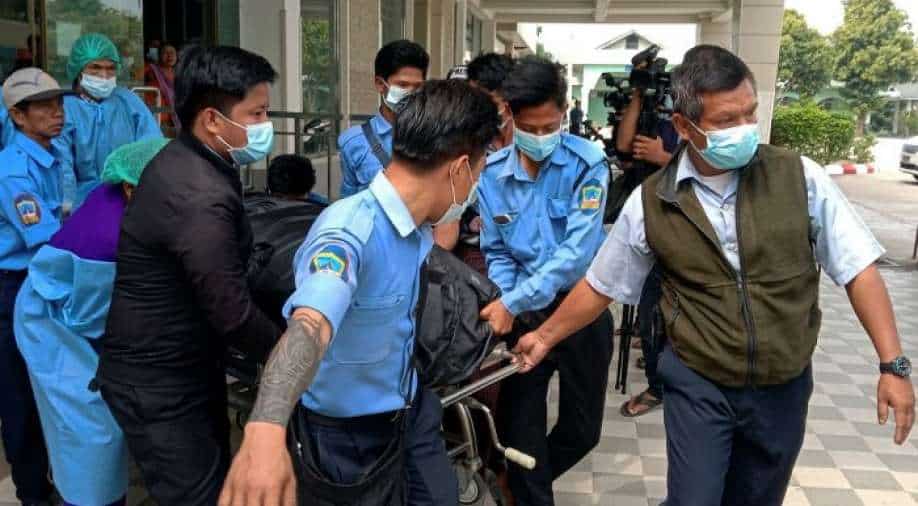 According to multiple reports, about 30 others were injured. Half of the injured people were shot with live rounds.

Protesters took to the streets in several cities and towns with members of ethnic minorities, poets and transport workers among those demanding an end to military rule and the release of elected leader Aung San Suu Kyi and others.

But tension escalated quickly in Mandalay where police and soldiers were confronting striking shipyard workers and other protesters.
Some of the demonstrators fired catapults at police as they played cat and mouse through riverside streets. Police responded with tear gas and gun fire, though it was initially not clear if they were using live ammunition or rubber bullets.

A young woman protester died on Friday after being shot in the head last week as police dispersed a crowd in the capital, Naypyitaw, the first death among anti-coup demonstrators.

The army says one policeman died of injuries sustained in a protest.

The demonstrators are demanding the restoration of the elected government and the release of Suu Kyi and others. They have also called for the scrapping of a 2008 constitution that has assured the army a major role in politics since nearly 50 years of direct military rule ended in 2011.

The army seized back power after alleging fraud in November 8 election that Suu Kyi's National League for Democracy swept, detaining her and others. The electoral commission had dismissed the fraud complaints.

Earlier on Saturday, several thousand protesters gathered in the northern town of Myitkyina and confronted lines of police before dispersing.

Crowds also marched again peacefully through the ancient capital of Bagan and in Pathein in the Irrawaddy river delta, pictures on social media showed.