Two from Bengal get Padma Shri award for selfless service 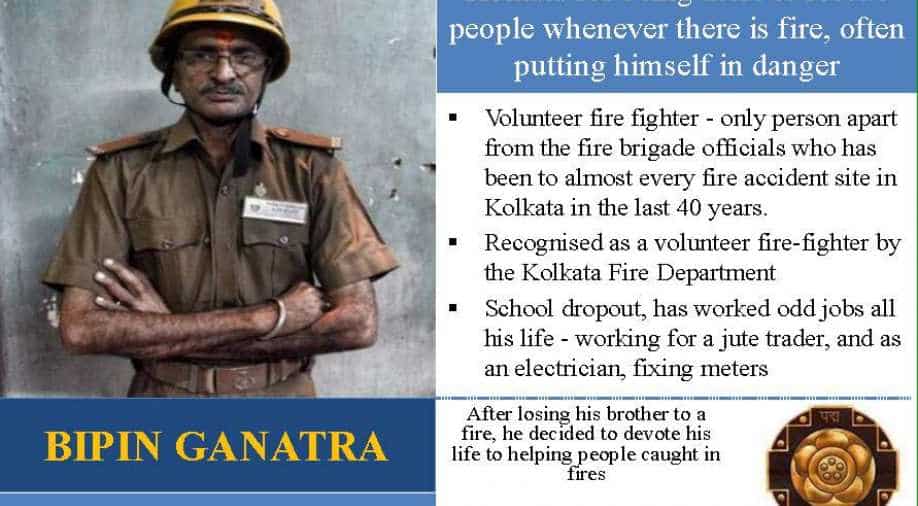 Two unsung heroes, Bipin Ganatra and Karimul Haque, from India’s eastern state of Bengal have been conferred the Padma Shri award - the highest civilian award of the country.

60-year-old Bipin Ganatra is a volunteer firefighter from West Bengal's capital Kolkata. Ganatra has dedicated the last four decades of his life towards firefighting and saving hundreds of lives.

Ganatra was only twelve when he lost his elder brother Narendra Ganatra to a fire. Since that day, he has not looked back. He has doused over hundreds of fires in the city of Kolkata, putting his own life at risk

Bipin Ganatra is a 60-year-old voluntary firefighter from Kolkata. (Image source: PIB) (Others)

He almost lost his life once, while dousing a fire that broke out at the warehouse on Strand Road in South Kolkata. He has also suffered injuries on several occasions.

An electrician by profession, he remains glued to news channels to pay attention to any news of fire breaking out in the city. He also calls the Fire and Emergency Department Headquarters in Kolkata at regular intervals to update himself with any news of a fire in the city.

Speaking to WION, Ganatra said, “I am very excited after I heard the news of the Padma Shri award being conferred upon me. I feel privileged that the President of India will give away this award to me. This instils in me a sense of responsibility and encourages me to work even harder and save lives around me.”

Locally known as the "ambulance-dada", Karimul Haque runs a 24*7 bike-ambulance service in Bengal's Jalpaiguri district. Haque is a tea garden worker, who ferries ill and the aged to nearby hospitals on his bike-ambulance.

Haque would ferry ill and the aged, sometimes even poor, who cannot pay a huge sum to reach the hospital. He even ferries pregnant women on his bike-ambulance to the hospital in case of emergencies.

“The area I come from, Jalpaiguri is uneven and has rough roads and to find an ambulance in case of an emergency is a far-fetched dream for many villagers. This bike-ambulance has helped over 3,000 villagers in the last few years,” said Haque.

Haque also provides door to door medical services. Besides this, he also sets up health camps in the region.

He also gets financial aid from the West Bengal state government amounting to Rs.4,000, of which, he spends half of it on the fuel for his bike-ambulance. Recently Bajaj Motors upgraded his bike-ambulance. Now, his upgraded ambulance has a waterproof stretcher and provision for oxygen cylinders.