Trump takes aim at Biden's Afghan policy, alleges thousands of terrorists might have been airlifted out of Kabul 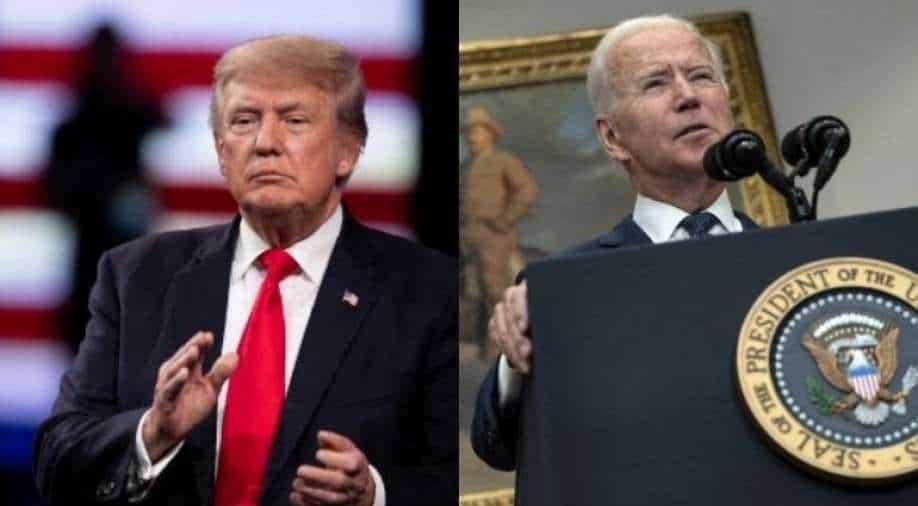 Taking aim at US president Joe Biden's Afghan policy, former President Donald Trump expressed concern that thousands of terrorists might have been flown out from Afghanistan as part of the evacuation process.

"Biden surrendered Afghanistan to terrorists and left thousands of Americans for dead by pulling out the military before our citizens," Trump said in a statement on Tuesday.

"Now we are learning that out of the 26,000 people who have been evacuated, only 4,000 are Americans. You can be sure, the Taliban, who are now in complete control, didn't allow the best and brightest to board these evacuation flights."

"Instead, we can only imagine how many thousands of terrorists have been airlifted out of Afghanistan and into neighbourhoods around the world. What a terrible failure. NO VETTING. How many terrorists will Joe Biden bring to America? We don't know!", He said.

Meanwhile, Republican Congressman Mike Waltz, a former veteran of Afghanistan, introduced a resolution in the House of Representatives, criticizing Biden's blatant disregard for the advice of military and intelligence advisors.

He alleges that President Biden, ignored advice on the nature and speed of the Taliban offensive and that he failed to present a coherent counterterrorism or evacuation plan to the American people, and has done harm to US credibility by abandoning the US's Afghan allies.

"President Biden has embarrassed the United States on the world stage and created the worst foreign policy blunder in our modern history," Waltz said.

Waltz said that Biden has embarrassed the United States on the world stage and has made the worst foreign policy blunder in US modern history.

As per Waltz, in order to seek a headline that he would withdraw US troops prior to the 20th anniversary of the September 11 attacks, Biden created a humanitarian crisis in Afghanistan.

'Now, we will have shamefully given away the freedoms of Afghans, our military equipment and infrastructure, and countless other resources to the hands of Taliban terrorists because of the President's cluelessness and stubbornness,' Waltz alleged.

'Additionally, it is growing more likely by the day we will have broken our promise to thousands of Afghan allies who stood should-to-shoulder with our troops on the battlefield that have now been handed a death sentence for our failure to safely evacuate them in a timely fashion," he said.

Waltz also said that the intelligence community has repeatedly warned that Al Qaeda 3.0 will return as the Taliban have shown no signs of cutting ties with the September 11 attack perpetrators.