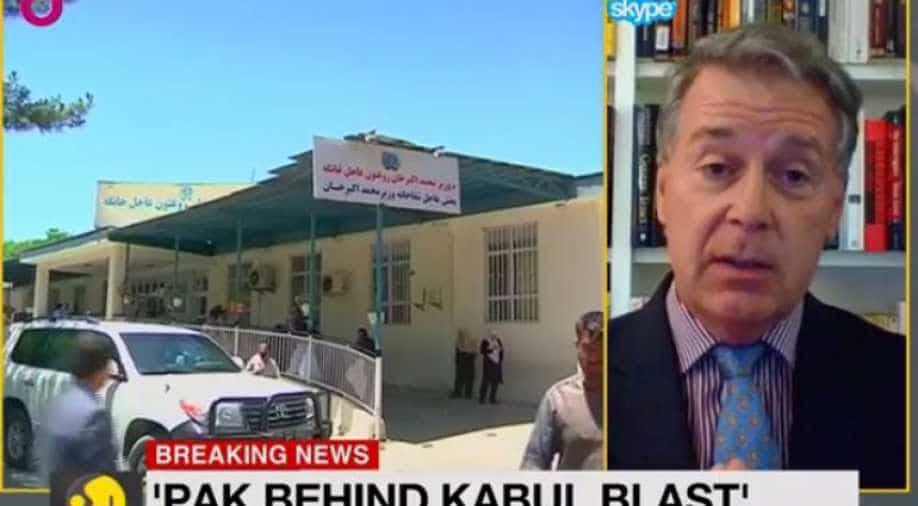 Afghanistan has blamed the Pakistan intelligence agency ISI for being involved in the blast in Kabul that claimed the lives of 90 people and injured hundreds of others.

Afghanistan president's spokesperson Nazibullah Azad told WION that the Pakistan-based Haqqani network was behind the attack.

In addition, Afghanistan's intelligence agency blamed the Taliban-allied Haqqani Network for the attack.

Watch what Carle had to tell WION:

A massive truck bomb ripped through Kabul's diplomatic quarter, bringing carnage to the streets of the Afghan capital just days into the holy fasting month of Ramzan. No group has claimed responsibility for the attack so far.

The bomb, one of the deadliest in Kabul and coming at the start of the holy month of Ramadan, exploded close to the fortified entrance to the German embassy, wounding some staff, German Foreign Minister Sigmar Gabriel said.

One Afghan security guard was killed and others were likely among the dead, Gabriel said. A spokeswoman for the German foreign ministry said the bomber's target was unknown.

The sound of the bomb, which went off near Kabul's busy Zanbaq Square, reverberated across the Afghan capital, with residents comparing it to an earthquake. Most victims appear to be civilians.

"The vigilance and courage of Afghan security forces prevented the VBIED (vehicle-borne improvised explosive device) from gaining entry to the Green Zone, but the explosion caused civilian casualties," NATO said in a statement.

The explosion damaged several embassies in the area, which houses diplomatic and government buildings and is a maze of concrete blast walls, vehicle barriers and armed security guards.

German Foreign Minister Sigmar Gabriel said the "despicable" attack killed an Afghan guard from the German embassy, and added that some employees had been injured, though he did not give further details.

He said the bomb had gone off "in the immediate vicinity" of the German embassy.

France, India, Turkey, Japan, the United Arab Emirates and Bulgaria similarly reported damage to their embassies, including shattered windows, as the blast drew an avalanche of international condemnation.

"That this attack would occur during the holy month of Ramadan underscores the senseless and barbaric nature of this attack," a White House spokesman said.

Amnesty International said the bombing shows that the conflict in Afghanistan is "dangerously widening in a way that should alarm the international community".

Germany was forced to postpone a scheduled deportation flight of rejected Afghan asylum-seekers in the wake of the attack. The European nation has drawn criticism for sending back Afghans to an increasingly dangerous country.

Wednesday's blast was the latest in a string of attacks in Kabul. The province surrounding the capital had the highest number of casualties in the country in the first three months of 2017 due to multiple attacks in the city, with civilians bearing the brunt of the violence.

Afghan troops are backed by US and NATO forces, and the White House is considering sending thousands more soldiers to break the deadlock in the battle against the Taliban.

US troops in Afghanistan number about 8,400 now, and there are another 5,000 from NATO allies. They mainly serve in an advisory capacity -- a far cry from the US presence of more than 100,000 six years ago.

US President Donald Trump spoke with his Afghan counterpart Ashraf Ghani and condemned the terror attack in Kabul, describing it as "barbaric".

He condemned the attack, which occurred during the holy month of Ramadan, underscoring the barbaric nature of the terrorists who are enemies of all civilised peoples," the White House said in a readout of the telephonic conversation between the two leaders.

Conveying condolences to the families and friends of those killed and injured in the blast, Trump commended the bravery of the first responders, who worked quickly to support the wounded.

"He also commended Afghan security forces for their steadfast efforts to defend their people from enemies who would seek to deny them the security and prosperity," the White House said.