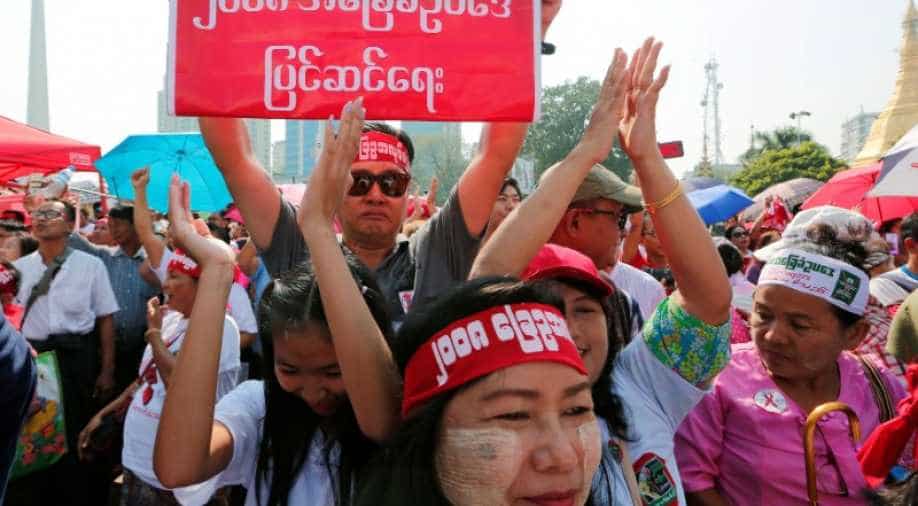 Protesters gathered in the center of Yangon to hear speeches by veteran democracy activists while singers led the crowd in chants of 'take a rest, military dictatorship', in the second demonstration in the city in a week.

Thousands of people rallied in Myanmar`s commercial capital on Wednesday in support of constitutional reform, amid mounting tension between the ruling party and the military over changes to the charter that enshrines the army’s role in politics.

Protesters gathered in the center of Yangon to hear speeches by veteran democracy activists while singers led the crowd in chants of “take a rest, military dictatorship”, in the second demonstration in the city in a week.

Nobel Laureate Aung San Suu Kyi’s National League for Democracy party launched a surprise bid in January to change the charter, pushing through parliament a proposal to form a committee to devise amendments despite objections from military-aligned lawmakers.

The proposal was Suu Kyi’s biggest challenge to the army’s power in nearly three years, and sparked a protest in the legislature from green-clad military appointees, who stood in silence for several minutes to show their opposition.

It was later approved by parliament, where the ruling NLD commands a large majority.

“We are demonstrating to support the constitutional amendments committee,” Yin Htwe, one of the organizers of Wednesday’s protest, told Reuters. “We are on the side of the people.”

In a press conference on Saturday, a spokesman for the army accused the NLD of using the “wrong procedure” to amend the 2008 charter, which it drafted during military rule.

He added, however, that army lawmakers would participate in the exercise.

Under the charter, the military is guaranteed a quarter of seats in parliament and any change requires a vote of more than 75 percent of members, giving the army an effective veto.

It also blocks Suu Kyi from becoming president, with a prohibition on presidential candidates with foreign spouses or children. Suu Kyi had two sons with her late husband Michael Aris, a British academic.

For nearly three years, she has ruled from “above the president” by creating a new position of state counselor.

The charter also gives the military control of ministries responsible for security, including defense and home affairs.

The NLD has not said what provisions of the constitution it might seek to reform. In the past, some members of the party have called for change to Article 436, which gives the military an effective veto over constitutional reform.

“I want to change all the sections which disturb the current government`s work,” said Thein Tun, a 73-year-old man who stood among the crowd on Wednesday hand-in-hand with his wife, Khin Khin Win.

“It is important for the good of the country,” Khin Khin Win added.