The Rashomon effect of US' huge bomb attack on Afghanistan 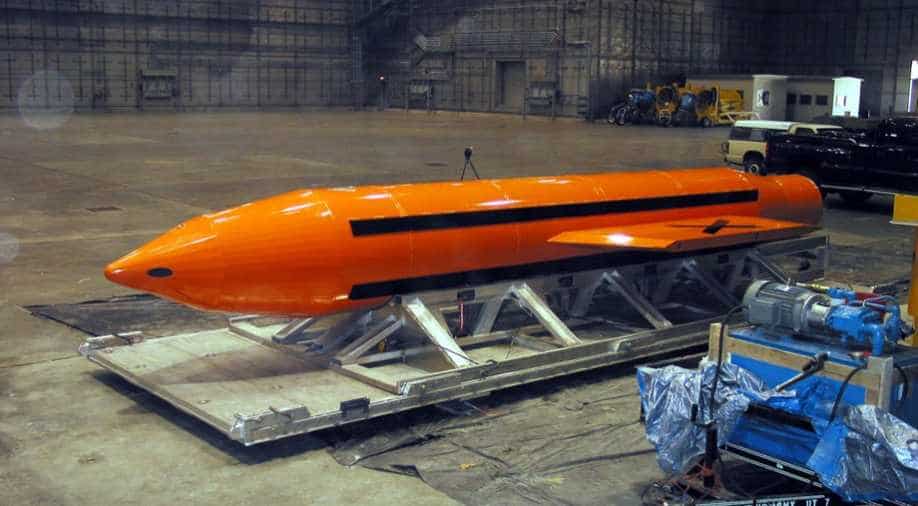 The United States has dropped its largest non-nuclear bomb on Afghanistan, killing dozens of Islamic State militants in a dramatic escalation that US President Donald Trump said had been "very, very successful".

Here are five other views on the use of the GBU-43/B Massive Ordnance Air Blast bomb -- dubbed the "Mother Of All Bombs" -- for the first time in combat since it was developed in the early days of the Iraq war.

General John Nicholson, the top US commander in Afghanistan, told a press conference in Kabul Friday that the bomb was the "right weapon against the right target".

"The enemy had created bunkers, tunnels and extensive mine fields, and this weapon was used to reduce those obstacles so that we could continue our offensive in southern Nangarhar," he said, adding US and Afghan forces at the site had seen "no evidence of civilian casualties".

Afghanistan's president Ashraf Ghani threw his support behind the bombardment, emphasising that "precautions were taken to avoid civilian casualties".

But other officials dissented, with several such as Omar Zakhilwal, the Afghan envoy to Pakistan, slamming the strike as "reprehensible" and "counterproductive".

"If big bombs were the solution we would be the most secure place on earth today," he tweeted.

As the dust settled analysts also began to question just how much the sound and fury of the strike signified, with some suggesting the decision may have been "disproportionate".

"The Trump administration made a lot of noise with this bomb, but the general state of play on the ground remains the same: The Taliban continues to wage a formidable and ferocious insurgency. ISIS, by comparison, is a sideshow," Michael Kugelman of the Woodrow Wilson Center in Washington told AFP, using an alternative acronym for IS.

"Still, from a strategic standpoint, there is an unsettling takeaway here: The US pulled off a huge shock and awe mission against an enemy that isn't even the top threat to the US in Afghanistan. The Taliban continues to sit pretty," he said.

Civilians living in Achin district appeared to welcome the bombardment.

"Daesh (IS) fighters are active in this area and have overrun our houses," said Achin resident Khair Mohammad. "We don't care if our houses are destroyed, we want Daesh to be eliminated."

Achin residents who spoke to AFP along the border with Pakistan, near the Torkham Gate crossing, appeared to shrug off early reports of the blast, however.

"I heard that there was some sort of bombing last night but it's nothing new, we are used to it," welder Arshad Ali told AFP.

"I talked to my family members over the phone last night and they said there had been shelling," said labourer Safdar Shinwari.

"Shelling and drone strikes are routine in that area and it's nothing unusual," he added.

More than 20 hours after the blast, IS issued a statement denying it had suffered any casualties whatsoever.

IS rarely admits its losses after such attacks.

For its part, the Taliban quickly condemned what it called "America's heavy use of weapons in Afghanistan".