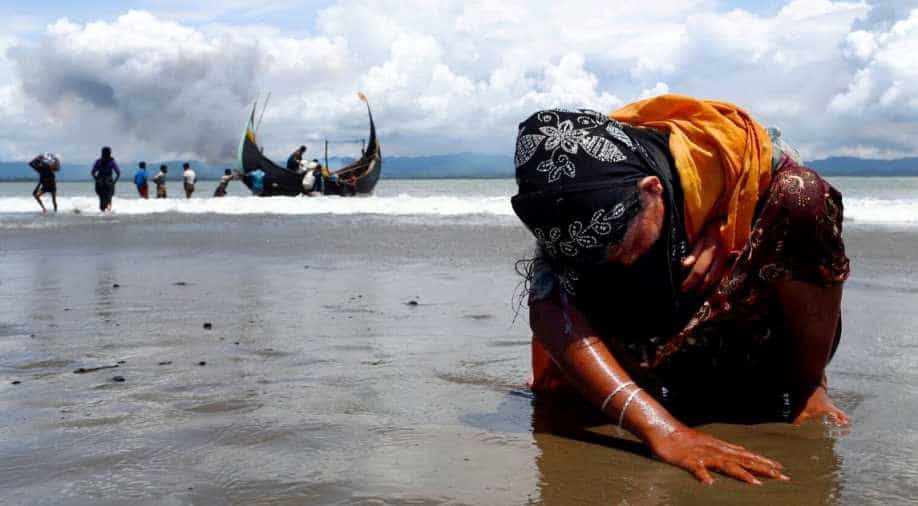 File photo: An exhausted Rohingya refugee woman touches the shore after crossing the Bangladesh-Myanmar border by boat through the Bay of Bengal, in Shah Porir Dwip, Bangladesh. Photograph:( Reuters )

All of the arrested belonged to Buthidaung, which has the largest concentrations of Rohingya Muslims in Myanmar's northwestern Rakhine State.

Thailand police have arrested 15 Rohingya Muslims on the charge of illegal entry. The police have said that they could be victims of human trafficking.

Out of 15, twelve were arrested on Tuesday and three more on Wednesday morning. They were arrested in Thailand's Mae Sot which is close to the bridge that separates both (Myanmar and Thailand) as per police's statement.

All of the arrested belonged to Buthidaung, which has the largest concentrations of Rohingya Muslims in Myanmar's northwestern Rakhine State.

Phubed Sang-aram, superintendent of the Mae Sot district police said: "They have been preliminarily charged with illegal entry, pending further interrogation to determine whether they are victims of human trafficking."

According to Phubed, three Thais have also been taken into custody for providing a home to the illegal migrants.

Mae Sot's district chief Chaiyapheuk Chiantranluk said that the Rohingya group made a plan to go to Malaysia via Thailand.

Global outrage was sparked in 2017 after over 730,000 Rohingya fled Rakhine state during weeks of brutal violence.  According to reports, hundreds of villages were burned and women were gang-raped.

During the violence, the United Nations had said that the gang rapes and mass killings were carried out with "genocidal intent".