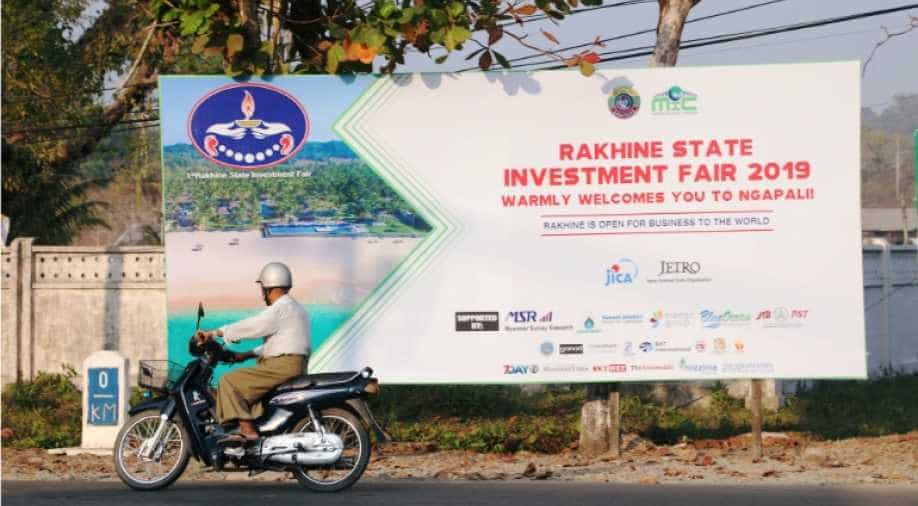 Organisers of a summit in Myanmar's crisis-hit western state of Rakhine are this week pitching to investors its plentiful farmland and fishing grounds, tourist-ready beaches and historic temples.

The event's website describes the "untouched opportunities" available in the strategically located region, close to large markets in India and Bangladesh. But a session at the fair will also be devoted to how to invest responsibly in the state, from which an estimated 730,000 minority Rohingya Muslims fled an army offensive in 2017.

A UN fact-finding mission last year said the military campaign, which refugees say included mass killings and rape, was orchestrated with "genocidal intent". Myanmar denies the charge and says its offensive was a legitimate response to an insurgent threat and that it is welcoming the refugees back.

Myanmar hopes the Rakhine State Investment Fair – the first of its kind – will bring money into the impoverished region. Civilian leader Aung San Suu Kyi, who in the past has said economic development is the key to addressing the state's long-standing religious and ethnic tensions, is scheduled to deliver the keynote speech on Friday.

But her government remains under pressure over the 2017 exodus of refugees to Bangladesh, and the plight of hundreds of thousands more Muslims still living in camps and villages inside Rakhine, where their movements and access to healthcare and education remain restricted. A separate conflict with Rakhine rebels that escalated in December has seen aid agencies blocked from reaching many areas.

"It's quite extraordinary that this investment fair is on, even though large chunks of central Rakhine are now off limits to prying eyes," said Laetitia van den Assum, a retired Dutch diplomat who was a member of a commission on Rakhine led by the late former U.N. chief Kofi Annan.

The investment fair has been organised by the Rakhine state government and Myanmar Investment Commission, with backing from the Japan International Cooperation Agency (JICA) and the Japan External Trade Organisation (JETRO).

More than 350 investors will mingle with local entrepreneurs and officials at the Rakhine tourist hotspot of Ngapali beach, discussing proposals to farm soft shell crabs or package cashew nuts.

"The Rakhine issue has tarnished the country's image. But the fair will change the international view of Myanmar," Htoo Min Thein, secretary of Rakhine's investment committee, said in an interview carried by the state-run Global New Light of Myanmar newspaper.

"A goal of the fair is to ensure the long-lasting peace, stability and progress in the state through investment," he said, adding that many areas of the state were unaffected by conflict.

Investment opportunities listed on the fair's website include several in the troubled north of the state, from where most of the Rohingya population fled in 2017.

Kazufumi Tanaka, JETRO's managing director in Yangon, said about 50 Japanese government officials, researchers and investors would attend the fair, and that Japanese firms were particularly interested in agriculture and fisheries investments.

Asked about human rights concerns, he told Reuters JETRO would advise Japanese firms on responsible investment practices, adding that most companies would be interested in projects in the south of the state, away from the conflict zone.

"Human rights due diligence is very, very critical of course," he said. "The image is a very negative image but the other parts of Rakhine state I believe are an opportunity for international investors."

JICA's Myanmar office also noted the need for responsible development in Rakhine, and said it hoped the fair would promote development in the state that leads to stability.

The Rohingya crisis slowed Myanmar's economic growth, turned off Western tourists and worried new investors. The government's tally of new foreign investment approvals, which peaked before the violence at $9.5 billion in 2015-16, was just $3 billion for the 10 months up to January.

Peter Beynon, chairman of the British Chamber of Commerce in Myanmar, said investors should look beyond Myanmar's "negative press".

"Engagement is always better than isolation," he said, adding that foreign investment in Rakhine could bring employment opportunities that would make refugees more likely to return.

Rakhine is one of Myanmar's poorest regions, despite natural gas reserves offshore and infrastructure projects including a planned economic zone at Kyauk Pyu, where parallel oil and gas pipelines to China's Yunnan province already have their terminals.

But some experts warn purely economic solutions to the state's woes could cement the marginalisation of the mostly stateless Rohingya. Kofi Annan's commission said in 2017 that development in Rakhine had to be addressed alongside security and human rights, said van den Assum.

Investments that benefit all communities were welcome, she said, but companies should ask themselves, "Do they want to operate under a regime that strictly enforces ethnic segregation?"

A Reuters special report in December revealed that officials had built new homes for Buddhists where the Rohingya once lived, making the return of many refugees to their original homes impossible.

Myanmar says it has been ready to accept returning refugees since January, and denies discriminating against Muslims who remain in Rakhine.

In Myebon, about 200 km (125 miles) north of Ngapali beach, Muslim residents are barred from returning to their homes nearly seven years after they fled communal clashes.

"I don't think it’s a good time to invest in Rakhine," said Tin Aung, a Muslim community leader in the camp where they now live. "It might be good for outsiders, but we, the people in the camps, are not going to benefit from these investments."