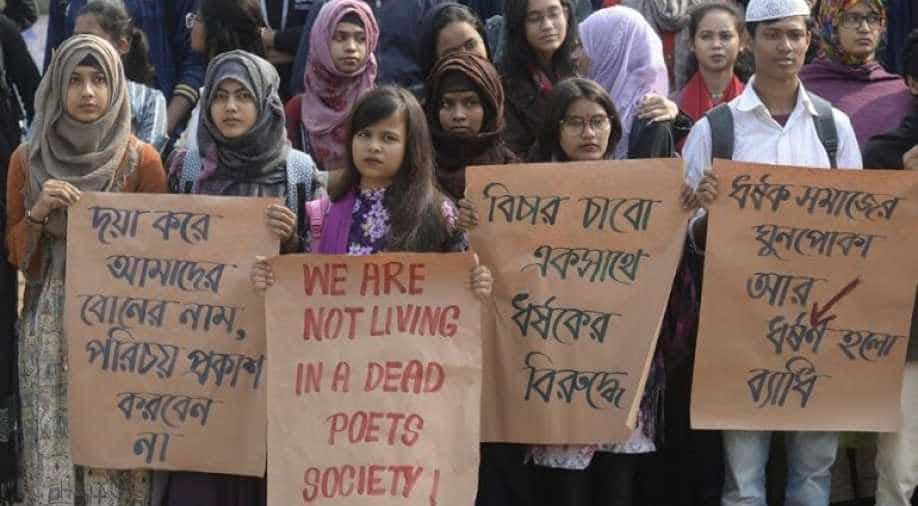 Dhaka University students hold placards as they take part in a rally to demand punishment for the people involved in the rape case of a female student of of Dhaka University, in Dhaka on January 6, 2020. Photograph:( AFP )

The victim in Sunday's attack was travelling to a friend's home when she was gagged, taken to a remote area in Dhaka's outskirts and sexually assaulted

The sexual assault of a student at a top university in Bangladesh triggered angry protests in the country on Monday, with demonstrators urging the death penalty for convicted rapists.

The South Asian nation has seen a doubling of reported rape cases in the last year, according to activists, triggering spasms of public anger directed at the glacial response of police and the justice system.

"Rape is an unforgivable offence. In Bangladesh, the punishment for rape is very slow," said demonstrator Shahela, who like the 21-year-old victim of Sunday's attack is a student at the prestigious Dhaka University in the capital.

"We want quick executions for the perpetrators so that others are deterred from committing such crimes."

Demonstrators linked arms and marched along key roads in Dhaka, halting traffic to demand the perpetrator's arrest within 24 hours.

"We are working to arrest him," senior police official Sazzadur Rahman told sources.

Police said around 1,500 students joined the protests, which remained peaceful. Reports estimated that twice as many people joined the rally.

The victim in Sunday's attack was travelling to a friend's home when she was gagged, taken to a remote area in Dhaka's outskirts and sexually assaulted.

Local rights group Ain O Salish Kendra said that there were 1,413 reported rape cases in Bangladesh last year, double the number recorded in 2018. Dozens of victims were killed while 10 committed suicide after they were attacked.

Nationwide protests gripped Bangladesh in April after a 19-year-old student who accused her seminary's head teacher of sexual harassment was doused in kerosene and set on fire.

Sixteen people were later sentenced to death over the attack, including the teacher.