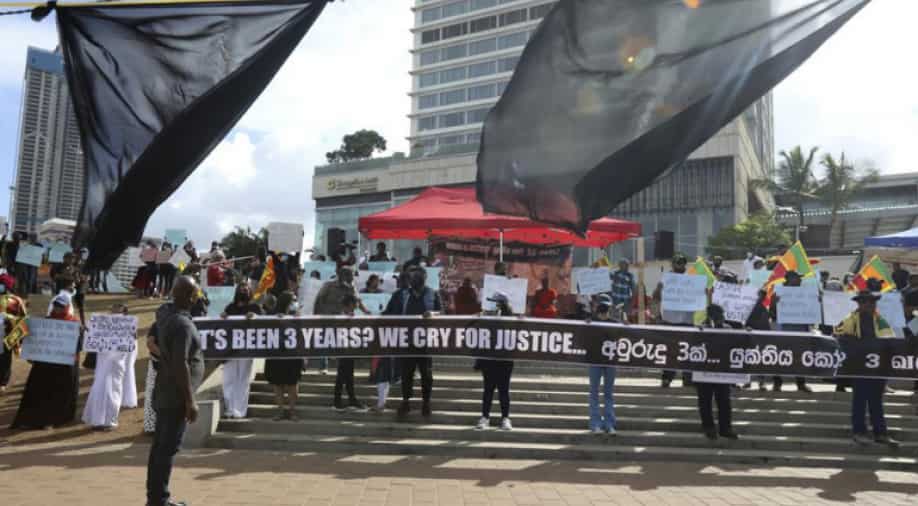 Sri Lankans hold a banner and placards demanding justice for the victims of the 2019 Easter Sunday attacks outside the president's office in Colombo, Sri Lanka Photograph:( AFP )

Over 260 people, including 42 foreigners from 14 countries, had been killed in simultaneous suicide bombings on three churches on Sri Lanka in 2019

Demonstrators in Sri Lanka on Sunday (April 17) asked the government to uncover the real conspirators behind the terror attacks that rocked the country in 2019.

Over 260 people, including 42 foreigners from 14 countries, had been killed in simultaneous suicide bombings on three churches on Sri Lanka.

Approximately 500 people had been injured in the Islamist State-inspired terror attacks.

The responsibility for the bombings was taken by the local Islamist extremist group National Thawheed Jamaat. It has links to ISIS.

Despite prior intelligence, former President Maithripala Sirisena and ex-Prime Minister Ranil Wickremesinghe were unable to prevent the attacks.

This had sparked an outrage in Sri Lanka. The leaders had to face global criticism as well.

On the third anniversary of the terror attacks, people took to the streets of Sri Lanka's capital Colombo, calling for justice for the victims.

Shiran Anton, whose wife and only daughter died in the attacks, told news agency Reuters, “My entire family is gone. Today, I live a very lonely life. I have no words to explain my agony.”

“I want to find out who the real culprits were behind this attack and why they did it,” he said.

Sri Lanka is currently facing its worst economic crisis since it gained independence. President Gotabaya Rajapaksa and Prime Minister Mahinda Rajapaksa have been accusing of corruption and nepotism.

Protestors are demanding their resignation after facing a severe shortage of necessities like fuel and food items.

The island nation, which has a population of 22 million people, has already defaulted on all of its external debt worth over $50 billion.

Rajapaksa’s government is also being blamed for not taking any action against Sirisena and other top officials for failing to prevent the bombings.

Malcolm Ranjith, Archbishop of Colombo Cardinal, has said ''the true conspirators in the attacks could still be at large.'' He also questioned the government over allegations that some members of state intelligence knew and had met with at least one attacker.