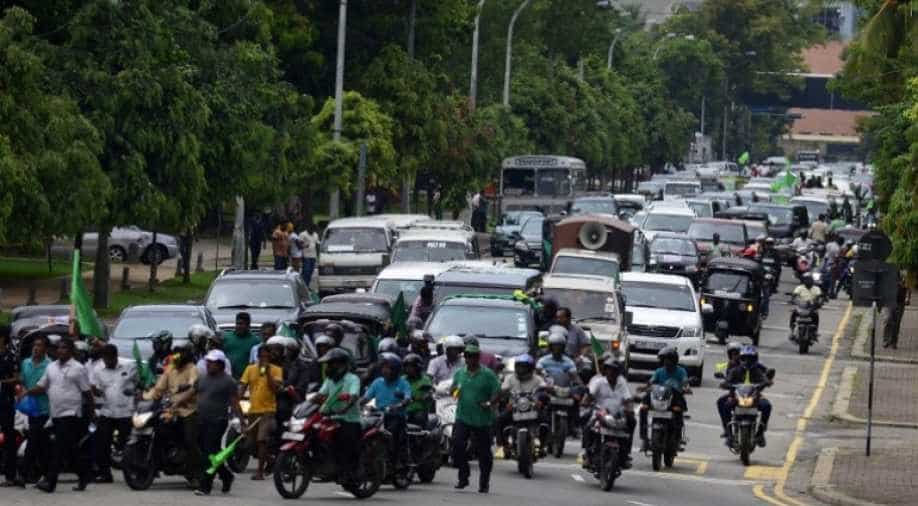 A noisy cavalcade of motorcycles, auto-rickshaws, cars and vans took loyalists of ousted prime minister Ranil Wickremesinghe to a rally to hear speeches slamming the president for sacking the head of government last month.

A rally of hundreds of cars carrying supporters of Sri Lanka's deposed prime minister brought chaos to Colombo streets on Thursday as they demanded that parliament be reopened.

A noisy cavalcade of motorcycles, auto-rickshaws, cars and vans took loyalists of ousted prime minister Ranil Wickremesinghe to a rally to hear speeches slamming the president for sacking the head of government last month.

President Maithripala Sirisena named former president Mahinda Rajapakse as the new prime minister in a shock move on October 26, and suspended parliament so neither has won a vote of confidence.

The rival prime ministers have now spent nearly two weeks at loggerheads, and the move -- which has been described as illegal by opponents -- has triggered a constitutional crisis.

Protestors had initially planned to drive to the residence of parliament speaker Karu Jayasuriya to urge him to defy the president and lift the assembly suspension.

But amid traffic chaos, the route was shortened and the rally was staged at Independence Square.

The motorists displayed posters of Wickremesinghe and carried banners which read "People Power".

The US embassy in Colombo issued a security alert warning of traffic hold ups.

"The embassy reminds citizens that even events intended to be peaceful can turn confrontational and escalate into violence," it said.

One man was killed and two others wounded in a shooting linked to the constitutional crisis last month.

The power struggle has paralysed much of the administration, according to legislators on both sides of the dispute.

Rajapakse is reportedly trying to engineer defections to ensure he has a majority in the 225 member assembly which Sirisena has said can only reopen on November 14.

Sirisena has filled only 22 of 30 cabinet positions -- purposefully keeping some jobs vacant to tempt legislators of Wickremesinghe's party to defect to Rajapakse's side.

According to the latest counts, Wickremesinghe has 103 MPs after gaining a defector on Tuesday, while Rajapakse and Sirisena have 101.

Most of the remaining 21 MPs are set to oppose Rajapakse, observers say.