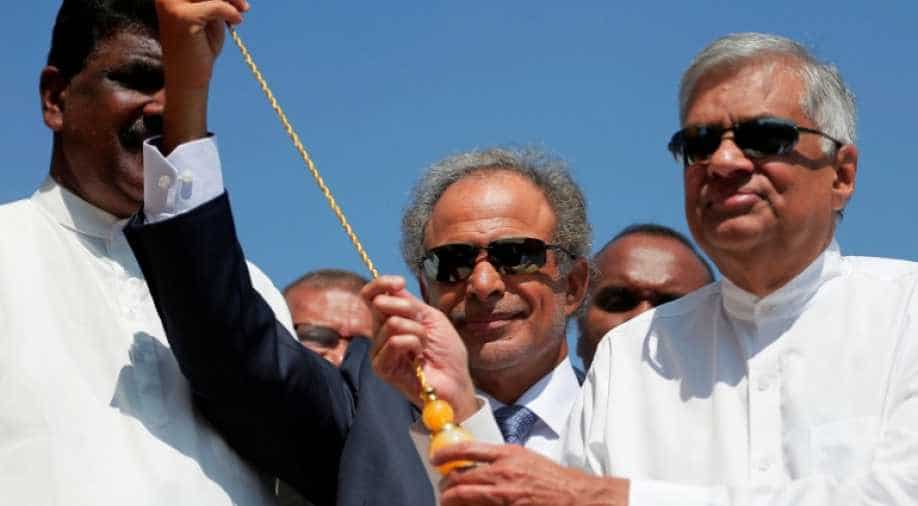 Ranil Wickremesinghe said Hambantota, a district in Sri Lanka's south which lies on one of the world's busiest shipping lanes, would become a global investment hub with the addition of the oil refinery and storage complex.

Sri Lanka began construction Sunday of a nearly $4 billion oil refinery it hopes will revive foreign interest in its shipping facilities after Beijing's takeover of a nearby port spooked international investors.

Prime Minister Ranil Wickremesinghe said Hambantota, a district in Sri Lanka's south which lies on one of the world's busiest shipping lanes, would become a global investment hub with the addition of the oil refinery and storage complex.

The $3.85 billion projects are the single largest foreign investment in Sri Lanka's history. It is jointly funded by Oman and Singapore-registered Silver Park International, a company owned by an Indian business family.

The oil facility is near the port of Hambantota, which was controversially leased to a Chinese state-owned firm in 2017 for 99 years after Sri Lanka failed to service a loan from Beijing.

The circumstances surrounding China's acquisition of the port generated concern in neighbouring India and beyond over Beijing's expanding presence in the Indian Ocean.

But the government pointed to this new line of cash pouring into the region as proof foreign investors were not deterred by that experience.

"The interest was shown by the Oman government, the interest shown by many other investors from other parts of the world shows that Hambantota will become a truly international investment zone," Wickremesinghe said Sunday.

Wickremesinghe also said he hoped to strike a deal within three months with Indian airport authorities to revive a $210 million airport in Hambantota dubbed the "world's emptiest" international terminal for its lack of flights.

The oil storage tanks are expected to be completed within two years while the refinery is due to be up and running by 2023.

Once fully operational the refinery -- the second in Sri Lanka -- is to export nine million tonnes of petroleum products annually.

The Indian Ocean island nation does not have oil of its own. It refines imported crude, but the existing refinery is unable to meet demand.

The Hambantota port was built by former president Mahinda Rajapakse, but like many of his ambitious infrastructure projects it ended up a white elephant.

Unable to service the loan, the Wickremesinghe government in 2017 leased the Chinese-built port to a Beijing company for $1.12 billion.

This stoked controversy, with Beijing rejecting suggestions it ensnared Sri Lanka in a "debt trap" to acquire the port.