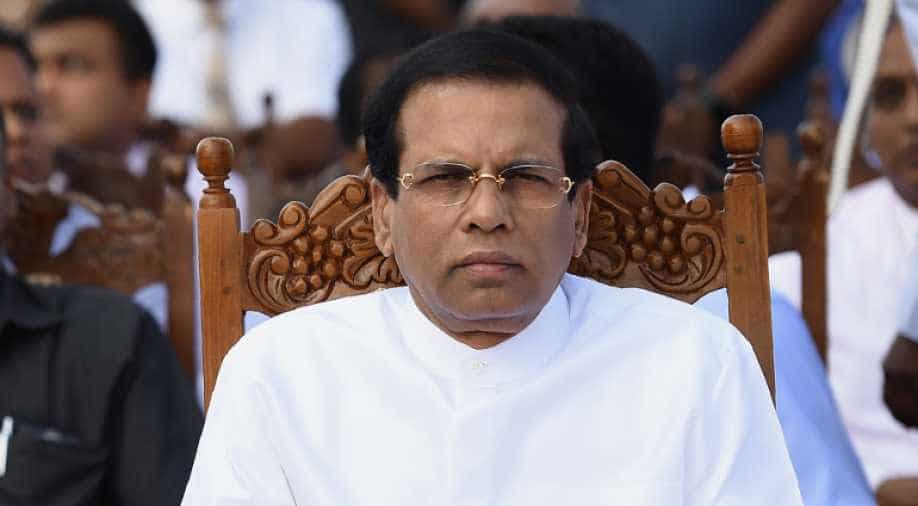 A spokesman for President Maithripala Sirisena's party announced the new u-turn just hours after Sirisena told diplomats in Colombo that parliament would be allowed to meet on Monday.

The Sri Lankan president's party on Thursday reignited a constitutional crisis over which of two rival prime ministers heads the government by insisting that parliament will remain suspended.

A spokesman for President Maithripala Sirisena's party announced the new u-turn just hours after Sirisena told diplomats in Colombo that parliament would be allowed to meet on Monday.

Wickremesinghe refused to accept the dismissal and the president suspended parliament.

The announcement of a Monday meeting had boosted hopes that lawmakers would be allowed to vote on which of the arch-foes they support. Rajapakse had also told a meeting of academics in Colombo that the legislature will be recalled on Monday.

But at the end of the day, Sirisena party spokesman Mahindananda Aluthgamage told reporters parliament will only reconvene on November 16 in line with the early suspension order. "On Monday we will have a mass rally near parliament."

In parallel, the Rajapakse administration announced measures to reduce personal and corporate taxes and cut the price of fuel and several commodities. Observers said this could be an attempt to win over the population.

The renewed suspension still came as a new bombshell in the dispute which will mark one week with much of the government paralysed.

Parliament speaker Karu Jayasuriya warned this week that delaying the reopening of parliament could lead to a "bloodbath" on the streets. One activist has already been killed in fallout from the tensions.

Sirisena agreed to lift the suspension in a meeting late Wednesday with Jayasuriya, according to officials. But the speaker's staff said no written notification of the deal was ever sent.

The crisis has put the country on edge, threatens to polarise voters and also caused international concern.

Sirisena insists his actions were legal but Jayasuriya, who holds the third most powerful state post, has refused to defend the president's manoeuvres.

Attorney General Jayantha Jayasuriya has also cast doubt on the legality of Sirisena's moves, increasing pressure on the president.

Colombo-based Western diplomats have made it clear that they were unwilling to recognise the new administration, diplomatic sources said.

The United States, neighbouring India and Sri Lanka's key financial backer China have called on the rivals to peacefully resolve the crisis.

Wickremesinghe has remained bunkered in the prime minister's official residence in Colombo with hundreds of his followers camped outside.

He has repeatedly demanded that the legislature be recalled for him to prove his majority in the 225-member assembly.

Rajapakse, whose decade as president up to 2015 became known for corruption allegations and the brutal ending of the Tamil civil war, is working out of a separate building that is officially the prime minister's offices.

The 72-year-old has named a small ministerial team of 12 and addressed bureaucrats at the finance ministry on Wednesday. He added another 14 ministers on Thursday night.

The two rivals are also jockeying for power behind the scenes, battling to tempt lawmakers from opposing sides to bolster their numbers for when a vote is held.

Both sides have asked legislators on foreign visits to return home immediately.

Rajapakse has given five legislators from Wickremesinghe's party ministerial positions in his cabinet after they defected.

Wickremesinghe has convinced at least two lawmakers from Sirisena's camp to join his United National Party.

According to the latest counts, Wickremesinghe has 104 MPs while Rajapakse and Sirisena together have 99. A majority of the 22 remaining MPs are expected to back Wickremesinghe, observers said.

Even if the crisis is patched up, observers are worried about how the country will go into a presidential election scheduled for next year and legislative polls in 2020.

"The struggle for power jeopardises progress on reforms, ethnic reconciliation, and prospects for peaceful and fair elections in 2019," said the International Crisis Group think tank.

It has called on the United States, European Union and other key nations to put more pressure on Sirisena to end the battle.

"They should back these calls by making clear that Rajapakse's appointment, if it stands, threatens the future of security and economic cooperation."