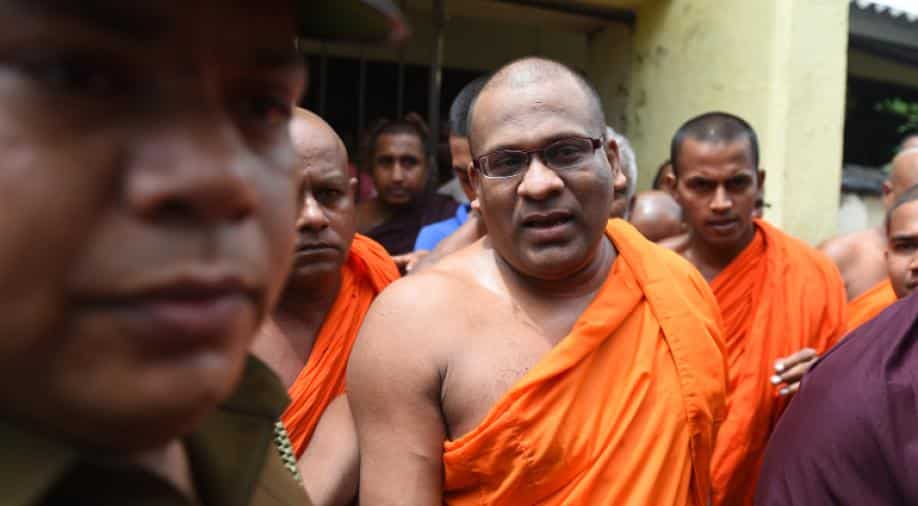 Fugitive Buddhist monk Galagodaatte Gnanasara (C) arrives at a court in Colombo June 21, 2017 to surrender in response to a warrant for his arrest. Photograph:( AFP )

Galagodaatte Gnanasara had appealed over the sentence handed down for disruptive behaviour during a trial in 2016.

Sri Lanka's Supreme Court Friday dismissed the appeal of an ultra-nationalist Buddhist monk and upheld his six-year sentence for contempt of court.

Galagodaatte Gnanasara had appealed over the sentence handed down for disruptive behaviour during a trial in 2016.

The original case had seen the firebrand cleric jailed for six months for intimidating a woman, whose cartoonist husband was abducted by the military.

Gnanasara, who has faced several previous cases on charges of hate crimes against minority Muslims in Buddhist-majority Sri Lanka, has been in and out of hospital since his imprisonment in June this year.

His Bodu Bala Sena (BBS), or Buddhist Force, has denied allegations it was behind riots against Muslims in 2017 and 2014 that left four people dead.

Gnanasara's intimidation of Sandya Eknaligoda took place when he attended the 2016 trial of military officers accused of abducting her husband Prageeth in 2010, whose cartoons lampooned former strongman president Mahinda Rajapakse.

Last year, Gnanasara spent a month on the run as police pursued him in connection with a string of attacks against Muslims. He later surrendered.