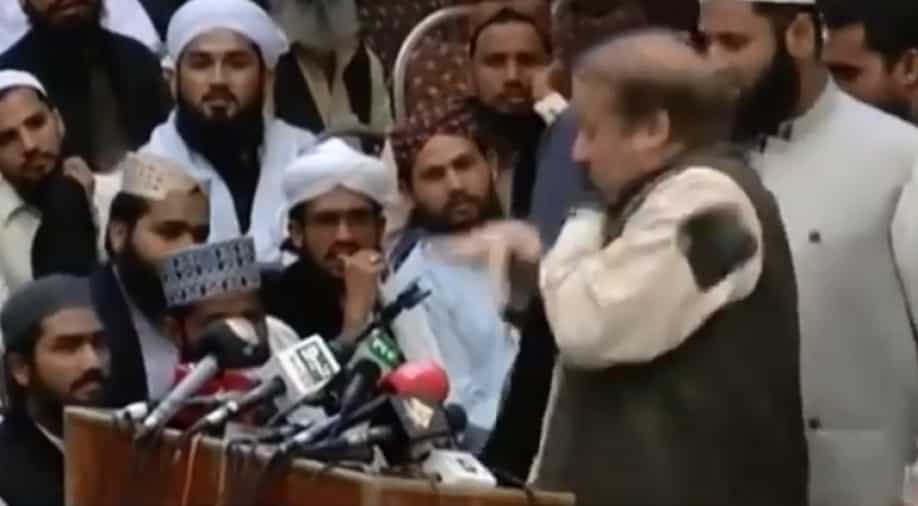 Nawaz Sharif, who was a chief guest at Lahore's Jamia Naemia seminary, was heading towards the rostrum for a speech when a student hurled a shoe at him that hit his shoulder and ear

A former seminary student hurled a shoe ousted Pakistan prime minister Nawaz Sharif during a function at an Islamic seminary in Lahore.

Nawaz Sharif, who was a chief guest at the Jamia Naemia seminary, was heading towards the rostrum for a speech when a student hurled a shoe at him that hit his shoulder and ear.

The student, identified as Talha Munawwar, also managed to reach in front of Sharif and chanted the slogan "Labbaik Ya Rasoolullah".

Security personnel caught the student and his accomplice who also chanted "Labbaik Ya Rasoolullah" slogans and reportedly beat them.

The two students were handed over to police. Police identified his accomplice as Sajid. Two other suspicious persons were also arrested from the event, Pakistan media reported.

The situation became very tense after the incident.Nawaz Sharif made a brief speech in which he did not mention the man who threw the shoe at him.

#WATCH: A student hurls a shoe at Former Pakistan PM Nawaz Sharif at an event he was attending in Lahore, Pakistan earlier. pic.twitter.com/2zhLl2HjZE

Religious parties, especially the Tehreek-e-Labbaik, Pakistan, have held Nawaz Sharif and his party, the (PML-N), responsible for making an attempt to change a clause related to the finality of Prophet Mohammad (PBUH) in the Constitution.

The incident comes a day after a religious extremist blackened the face of Pakistan's Foreign Minister Khwaja Asif with ink when he was addressing a party's workers' convention in his hometown in Sialkot, around100-km from Lahore.

In yesterday's incident, Faiz Rasool, who threw ink at the foreign minister, told the police that he vent out his anger because the PML-N had tried to change the finality of the Prophet in the Constitution.

"This hurt the sentiments of millions of Pakistanis including myself," he said.

Pakistan's Law Minister Zahid Hamid had to resign last November when hundreds of Tehreek-e-Labbaik Pakistan supporters camped at Islamabad's Faizabad traffic interchange forcing the PML-N government to take action against those in the federal cabinet responsible for attempting to change this clause from the Constitution.

PML-N leader and Railway Minister Khwaja Saad Rafique said those afraid of popularity of PML-N are behind such incidents.