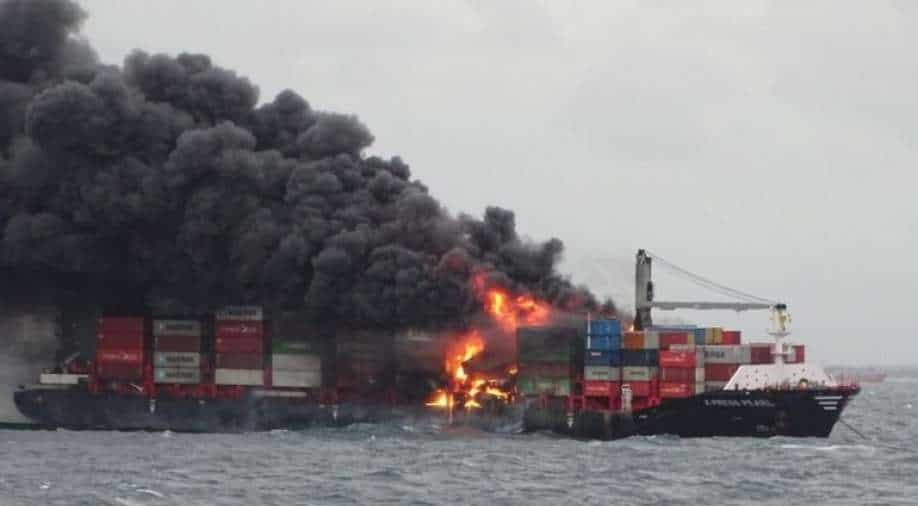 A major fire broke out on the ship on Tuesday morning, following an explosion that was reportedly caused by collapse of containers due to rough weather

Based on Sri Lanka’s request, the Indian Coast Guard (ICG) has tasked offshore patrol vessels ICGS Vaibhav and Vajra towards Colombo in Sri Lanka to bolster firefighting and pollution response efforts on MV X-Press Pearl, a container ship that is ablaze.

A major fire broke out on the ship on Tuesday morning, following an explosion that was reportedly caused by collapse of containers due to rough weather. The container ship that was on its way from Hazira to Colombo was anchored about nine nautical miles (about 16 kilometres) off Sri Lanka’s major port city.

The ship was carrying 1,486 containers and about 25 tonnes of hazardous nitric acid and other chemicals. So far, the 25 crew on board the ship, including five Indians have been evacuated. It was on May 20, Thursday that a fire first broke out on the said ship, following which it was brought under control by Sri Lankan Port authorities by the next day.

However, on Tuesday morning, owing to rough weather nearly 10 containers are said to have fallen overboard after the explosion and resultant fire. The 325 metric tonnes of fuels held in the large container vessels tanks are feared to pose a threat of oil spill in the region.

Besides the two ICG vessels headed for the site of fire, their formations at Kochi, Chennai and Tuticorin are on standby for immediate assistance towards pollution response. ICG is in continuous coordination and communication with Sri Lankan authorities for the operation and its aircraft are also being brought to Tuticorin from Chennai and Koch for aerial surveillance.

Over the last ten days, the Indian Coast Guard and Indian Navy have been engaged in monitoring, search and rescue operations across India’s west coast that was struck by a very severe cyclone "Tauktae". The effects of this cyclone were felt in Lakshadweep islands, Kerala, Tamil Nadu, Karnataka, Maharashtra, Goa, and in Gujarat where it made landfall. Currently, the ICG assets are also deployed for search and rescue, any eventuality that may arise from the impact of Cyclone Yaas that is predicted to make landfall on India’s east coast between Odisha and West Bengal.

In September 2020, a major fire had broken onboard MT New Diamond, that was carrying about 2.7 lakh metric tonnes oil and positioned off the eastern coast of Sri Lanka. Mammoth efforts by the Indian Coast Guard in coordination with other agencies ensured that the blaze was brought under control without any instances of oil spill. The ICG has said that as an active member of South Asia Co-operative Environment Programme (SACEP), it remains committed to its responsibilities of safeguarding of the ocean environment in the region.