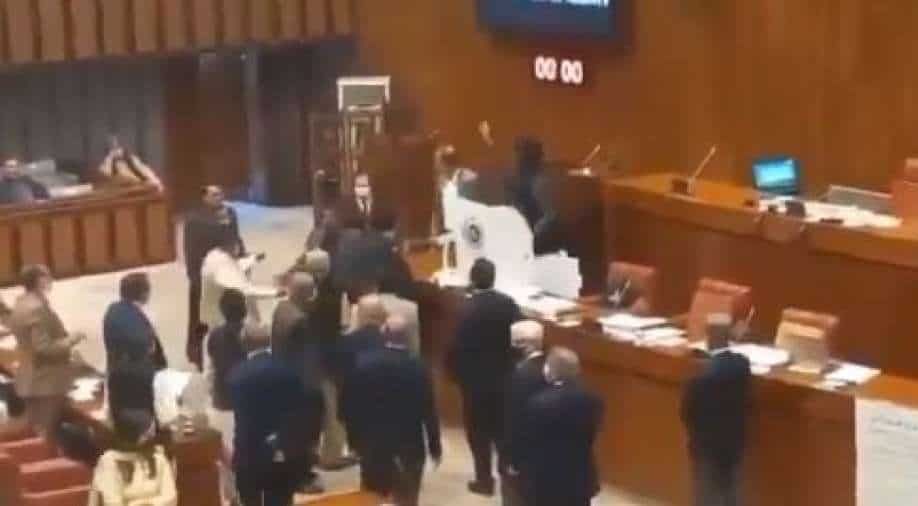 Videos that made way to the social media showed Pakistan ministers engaging in a scuffle after Chinese spy cameras were found hidden inside the hall.

Pakistan Senate, or the Upper House of the Parliament, on Friday descended into chaotic fracas after Federal Minister for Information Shibli Faraz accused the opposition of installing cameras over the polling booth for the chairman and deputy chairman elections.

Federal Minister for Science and Technology Fawad Chaudhry, however, countered the allegation saying spy cameras can possibly be not detected, and the ministers might have mistaken CCTV cameras with them.

This is one example of Spy Camera the camera can be fitted in a head of nail even,detection of such cameras is impossible, in all likelihood CCTV Camera cable is misunderstood as spy camera pic.twitter.com/KPu8a2RCpA

Pakistan Senate met on Friday to elect its chairman and deputy chairman through a secret ballot following the oath taking of its 48 newly-elected members.

Videos that made way to the social media showed Pakistan ministers engaging in a scuffle after so-called Chinese spy cameras were found hidden inside the hall.

Pakistan Tehreek-e-Insaf party's nominee Sadiq Sanjrani, meanwhile, is expected to face a tough challenge from joint opposition candidate Yousaf Raza Gilani in the race for the chairmanship of the Senate. Notably, the former premier's surprise victory in the Senate polls had rattled the ruling party led by Prime Minister Imran Khan.

Incumbent Senate chairman and the ruling party's nominee Sanjrani is vying for a second term while Pakistan Democratic Movement's (PDM) candidate and former prime minister Gilani, who defeated finance minister in the Senate polls last week, is confident of giving another setback to the government.

A tough competition is expected between the two sides in the House of 100. The winner will need to get a simple majority of 51. The PDM - an alliance of 11 Opposition parties - claims that it has the support of 51 senators. Similar claims have been made by the government.

The two sides have been blaming each other for using money and other tactics to woo lawmakers to support their candidates.

The Opposition had demanded the Prime Minister's resignation after the debacle following which Khan decided to take a vote of confidence on Saturday which he won comfortably.

The ruling party challenged in the Election Commission of Pakistan the victory of Gilani in Senate polls on the basis of alleged fraud, urging it not to issue notification of his election.

Elections for the Upper House of the Parliament were held on March 3, days ahead of retiring of its members on March 11.