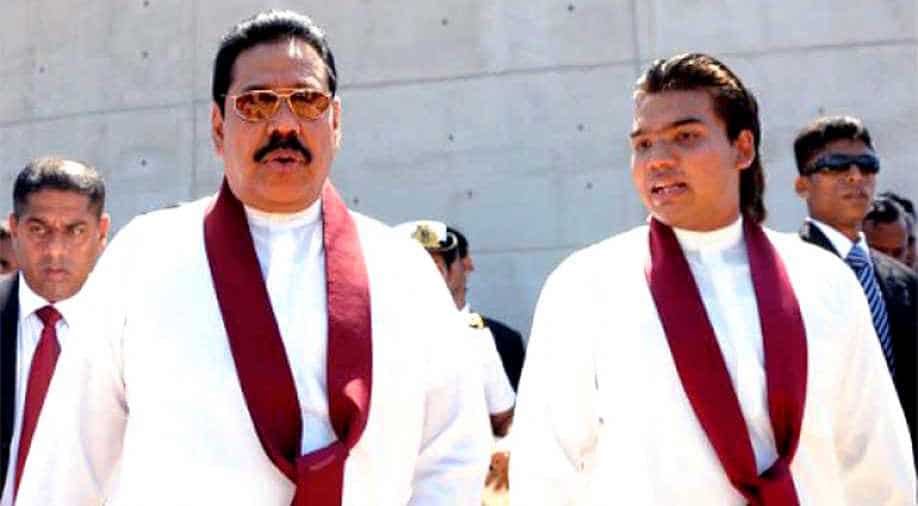 Namal insisted that it is not a constitutional crisis, but a political crisis in Sri Lanka.

Day after Mahinda Rajapaksa took oath as the new Prime Minister of Sri Lanka, his son and Member of Parliament Namal has reached out to India. New Delhi is yet to endorse Rajapaksa's prime ministership, saying it is "watching developments closely." In an exclusive interview to WION, Namal Rajapaksa, who in the past has accused India of influencing elections and acting against his father's presidency, has said they're "ready to put the past behind."

"Indian influence in the region is very important. India has to play a bigger role when it comes to the region's development - we have always believed that. Before 2015, there was a misrepresentation of his (Rajapaksa's) policies. Now we want to talk about the future, and not the past. We were non-aligned and we always want to be non-aligned," said Namal.

When asked about China's dominance and mounting debt, he called Beijing Colombo's partner. "My father offered Hambantota port to India first. Since the deal with India did not materialise, we had to go to China. There is nothing for India to be worried about. China and Sri Lanka are economic partners. China has invested a huge amount of money in our country. But we want friendly relations with every country."

Namal also defended President Maithripala Sirisena's decision to sack the Wickremesinghe government, saying, "Appointing Rajapaksa as Prime Minister was in national interest. Valid reasons were given which were purely based on national interest and keeping in mind national security."

President Sirisena, in a sudden turn of events, sacked Prime Minister Ranil Wickremesinghe on Friday and replaced him with former President Mahinda Rajapaksa. The President then prorogued the Sri Lankan Parliament prompting protests and a demand for the House to be reconvened, to allow lawmakers to choose their leader.

Wickremesinghe has called his removal unconstitutional and has demanded he be allowed to prove his parliamentary majority.

Observers call it the first such unconstitutional transfer of power in Sri Lanka. But Namal today insisted that it is not a constitutional crisis. He called it a "political crisis" and was confident that his father Mahinda Rajapaksa has the required numbers to prove majority in Parliament.

Attacking Wickremesinghe, he said, "I ask: What reforms have taken place here during Wickremesinghe's term? They promised to amend the Constitution, but did nothing. They promised reforms but nothing happened. They postponed the provincial election for three years. Now they are talking about all this. What happened in their government?"

The return of Rajapaksa, a former president who crushed a decades-old Tamil insurgency, has stoked fears of fresh political and ethnic division in the island nation of 21 million mostly Sinhalese Buddhists, with Tamil and Muslim minorities.

Namal Rajapakse said his party was prepared to put the past behind. Listing out his father's priorities, Namal said, "We are looking at bringing economic and social stability in the country, rehabilitation of former LTTE cadres and of course the constitutional amendment which should be acceptable to everyone."

India and western countries have expressed concern about Rajapaksa's ties to China, as he ushered in billions of dollars of investments from Beijing during his tenure as President, to help rebuild the country after a 26-year civil war against ethnic Tamil separatists ended in 2009. In fact, China was the first country to congratulate Rajapaksa and endorse him as the new Prime Minister.

The power struggle in Sri Lanka comes at a critical time for its economy, with credit rating agencies warning that the turmoil could raise financing costs and lower foreign capital inflows as it attempts to refinance sizeable government debts.