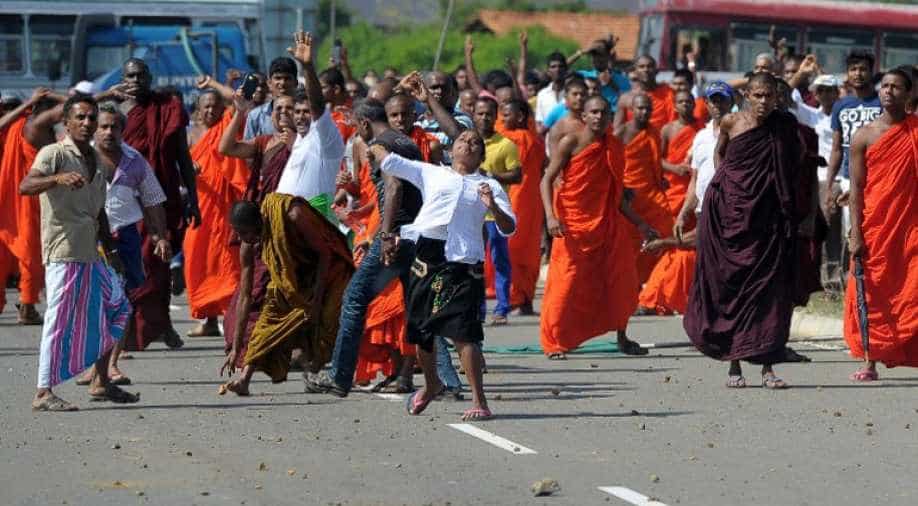 Sri Lankan activists lead by Buddhist monks pelt stones with police during a protest in the southern port city of Hambantota on January 7. Photograph:( AFP )

The inauguration of a China-backed SEZ in Sri Lanka's southern port of Hambantota was today marred by a protest by supporters of former President Mahinda Rajapaksa over what they said was encroachment of private land, in an embarrassment to the government.

Defying a court order obtained against any form of public protests for 14 days from today, the Rajapaksa backers made their way into the inauguration site where Prime Minister Ranil Wickremesinghe and Chinese Ambassador Xi Xianliang were present with other senior government ministers.

Police used tear gas and water cannon to quell the protest, during which the protesters hurled stones at the site, eyewitnesses said. At least 10 people, including three policemen, were injured and admitted in the Hambantota hospital.

Hambantota, some 240 kms from here, is former strongman Rajapaksa's hometown as well his electoral district.

The protesters said they were defying court orders due to "people's rights" over the land.

"We are against this move to give our lands to the Chinese," Omare Kassapa, a leading Buddhist monk among the protestors, said.

"We are going ahead with the protest despite the court order to ban it because our people's rights are important to us," said Ranjith Soyza, a joint opposition legislator and Rajapaksa backer.

In a last-minute move to appease the Buddhist monk protest, Wickremesinghe rushed to Hambantota last night to have talks with the monks.

He said only 1,235 acres of land will be taken from Hambantota while the rest of the land needed for the project would be taken from the neighbouring districts of Moneragala, Matara and Galle.

The protest was based on the reported move to hand over 15,000 acres from Hambantota for the industrial park.

The agreement is to give the Chinese an 80 per cent stake in the Special Economic Zone (SEZ).

Speaking at the opening, China's Ambassador to Sri Lanka Yi Xianliang said China hopes to invest 5 billion dollars during the next 3-5 years in the Hambantota SEZ to create 100,000 jobs for the Sri Lankans.