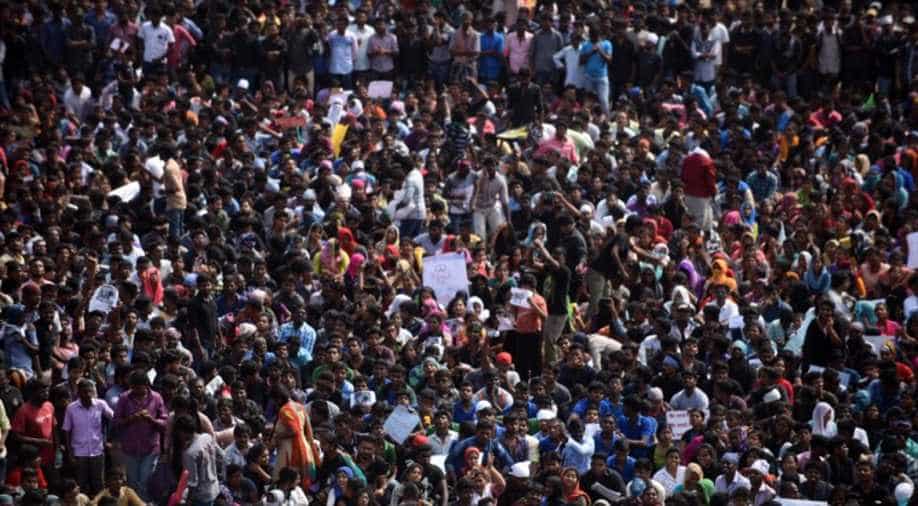 Indian students demonstrate against the ban on the Jallikattu bull taming ritual at Chennai's Marina on January 19. Photograph:( AFP )

The agitation against Jallikattu in south Indian state, Tamil Nadu, shows no signs of abating with many business establishments, schools and colleges in capital city Chennai declaring they will be shut tomorrow, media outlets reported. Music maestro AR Rahman, who hails from Tamil Nadu, also declared on Twitter that he would fast on Friday to express his solidarity with the pro-Jallikattu protesters.

I'm fasting tomorrow to support the spirit of
Tamilnadu!

Hundred thousands of demonstrators protested across the state on Thursday against the Supreme Court's earlier order banning Jallikattu. State chief minister O Panneerselvam's assurances that his government had the support of Indian Prime Minister Narendra Modi and his federal government did not seem to cut any ice with them.

The Indian government's top legal adviser, attorney general Mukul Rohatgi, defended the government's stand allowing use of bulls in events like Jallikattu in the top court, stating that the federal government had no power to enact a law on the subject.

Rohatgi said the Tamil Nadu government had the power to enact a law on Jallikattu since sports as a subject fell under the exclusive jurisdiction of the state government. He, however, asserted that animals should not be harmed or cruelly treated during such events.

Panneerselvam met PM Modi earlier in the day and pressed him for immediate steps for promulgation of an ordinance. He was told that the matter was sub judice, but the government would support any step taken by the state government, news agency, PTI, reported.

Forty-nine legislators of the AIADMK party that is in power in Tamil Nadu will meet Indian interior minister Rajnath Singh tomorrow, seeking his government's help to allow Jallikattu, PTI reported.

"We will seek the central government's help to conduct jallikattu, this is an emotional issue for our people," an AIADMK leader told PTI.

Wave of protests across Tamil Nadu

Businesses, theatres, schools and transporters have declared a day-long strike tomorrow supporting the  demand for immediate permission to allow the bull-taming sport.

#jallikattu is a cultural symbol . Respect it. Im all for animal rights but here that is not the point.tradition & livelihood are .

They rejected the statements of PM Modi and O Panneerselvam saying these were known excuses and disappointing, PTI reported.

In Madurai, where the sport has been held for centuries, agitators stopped trains pressing for their demand.

Protests continued to be held in other parts of the state as well, including Salem, Coimbatore, Karur, Tiruchirappalli and Erode, and neighbouring union territory, Puducherry.

The Tamil Nadu Traders' Federation and unions of auto-rickshaw and taxis operators and cinema houses have announced a shutdown tomorrow.

Leader of the opposition in the state assembly, M K Stalin, urged the state government to call an all-party meeting immediately and convene a session of the Assembly to take steps to ensure Jallikattu.

Opposition party DMK has also called for rail blockade across the state tomorrow.

Jallikattu is a centuries-old sport that is played among certain land-owning communities of Tamil Nadu, but was banned by India's highest court last year after animal advocacy group PETA (People for Ethical Treatment of Animals) said the sport of bull-taming is cruel as the animals are drugged and are then subdued by young men with their bare hands.

The restriction on playing Jallikattu sparked statewide demonstrations in the run-up to Pongal (January 14), a harvest festival, during which the sport is played.

The Supreme Court has refused to hear a plea which sought that India's highest court should hear the matter on the Jalikattu row pertaining to public protest at Marina beach. The Supreme Court asked the petitioner to approach the Madras High Court, India's news agency ANI reported, even as Tamil Nadu chief minister Panneerselvam met PM Modi in Delhi today to push for an ordinance on the bull-taming sport.