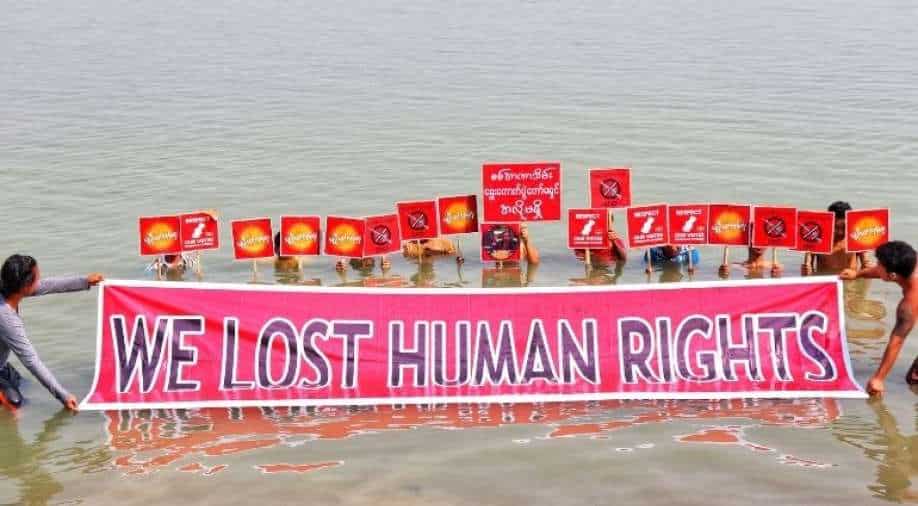 Protesters participate in a mock drowning as a signal to the world that they, as their country, need to be saved, in Nyaung-U, Myanmar March 19, 2021 Photograph:( Reuters )

The crackdown by security forces on pro-democracy protesters has left 250 people dead since the beginning of the coup on February 1. The violent crackdown on protesters has drawn ire from global governments, especially from the West.

People in Myanmar are protesting against a return to military rule after strides were made in running the country democratically. Reuters reported that over 20 protests were hold in the country overnight, running from the main city of Yangon to scattered communities in the state of Kachin.

Another protest of its kind took place in the city of Mandalay, where many medical professionals marched in white to mark a “Dawn protest”.

In many places, protesters were joined by Buddhist monks with candles. In many places, people used candles to recreate the three-fingered protest salute, which has become synonymous with multiple movements in Asia.

Yangon has witnessed some of the worst violence since the beginning of the coup. Many protesters on social media claimed that stun grenades were being fired by junta forces on protesters.

Junta spokesperson earlier said that force was used only when necessary.  On Saturday, the death toll went up to 247 as four more people were killed in separate attacks.