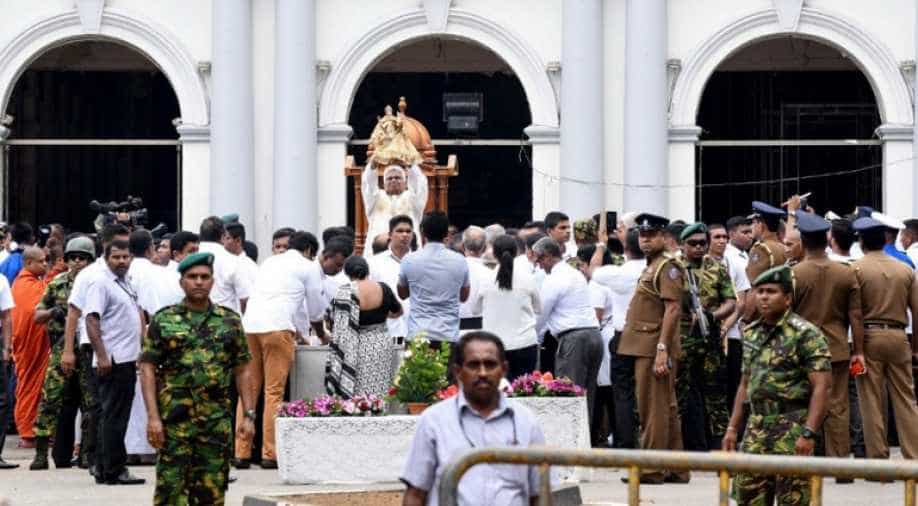 A Sri Lankan priest (C) holds up an unharmed statue, which allegedly was inside the prayer hall when a bomb went off on Easter Sunday, as Christian devotees pray in front of St. Anthony's Shrine in Colombo. Photograph:( AFP )

The curfew had been in place all day in North-Western Province on Tuesday.

Sri Lankan authorities on Tuesday imposed another night of curfew amid violence in the North-Western Province (NWP).

Police spokesman Ruwan Gunasekera said the night curfew will go into effect from 9:00 pm (15:30 GMT). Gunasekera added that NWP will be shutdown longer.

One person was killed as violence gripped the north-western area as a mob went on a rampage. The large scale unrest in Sri Lanka comes just weeks after the April 21st Easter suicide bombings in which over 250 people were killed.

The curfew had been in place all day in North-Western Province on Tuesday.

Police said Tuesday that 13 people had been arrested including Amith Weerasinghe, a man from Sri Lanka's majority Buddhist Sinhalese community on bail for his role in similar riots in March last year.

There have been reports of arson in other parts of Sri Lanka with several Muslim shops being targeted. Reports said attackers targeted mosques in NWP even as heavy security was deployed in the area.

"Security forces are assisting police who have been ordered to use maximum force to contain the violence," police spokesman Ruwan Gunasekera said.

Sri Lanka has been placed under emergency since the Easter attacks with the Army given powers to arrest people without warrant.

The authorities have also extended the ban on social media platforms in order to prevent spread of messages which may incite violence.