Pension for Indian armed forces: The politics and bureaucracy 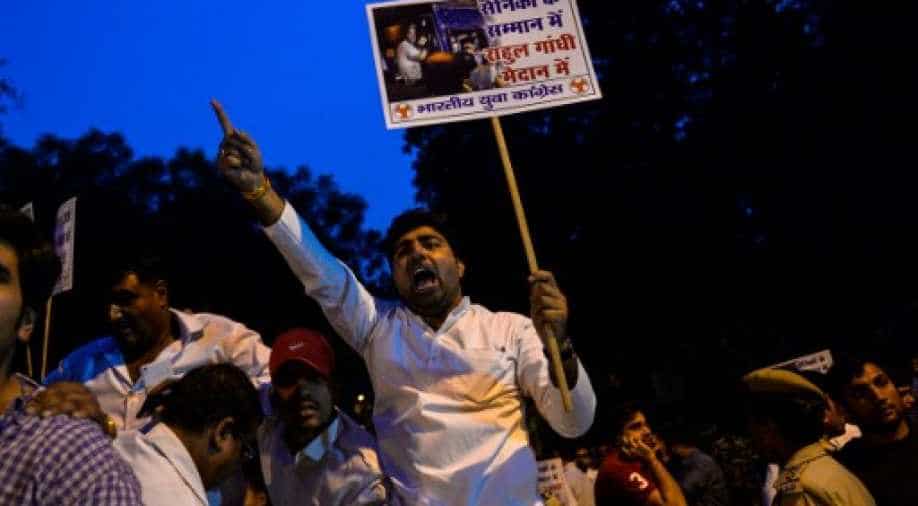 Supporters of Indian Youth Congress shout slogans in New Delhi on November 3, 2016, at a protest to pay condolences to an ex-serviceman who allegedly committed suicide over the One Rank One Pension (OROP) scheme. Photograph:( AFP )

The killing of a militant commander by the Indian Army in Jammu and Kashmir four months ago led to a curfew in the Valley and a spurt of hatred towards the Indian armed forces in the region. The violence that ensued once again put to fore the “Kashmir issue”, India’s bone of contention with Pakistan.

The attack by militants on an army base in the region’s Uri sector resulted in a scaled-up cross-border shelling, leading to Indian Army's “surgical strikes” in Pakistan-administered Kashmir.

The sentiment against the Indian defence and armed forces was cast aside by a sudden “patriotic” fervour in their support. But while the nation was busy judging patriotism based on whether one backed the move by the Indian Army or was against it, and hailed the personnel killed in Uri as “martyrs” and “bravehearts”, the recent suicide of an ex-army soldier over the demand for One Rank One Pension (OROP) has yet again fuelled the love-hate relationship India has with its forces.

What is One Rank One Pension?

Last year, army veterans took to the streets, organised massive protests and hunger strikes in the national capital. They were calling for One Rank One Pension. Simply put, they demanded the same pension for the same rank and the same length of service.

Major General (retd) Satbir Singh, who was among those spearheading the protests, explains: “Look at it this way. A colonel retiring in 1980s draws lesser pension than one retiring in 2014. Both have retired on the same rank and have served for the same number of years. The only difference is the latter has seen several pay reviews.”

Following the protests, the government led by Prime Minister Narendra Modi announced the One Rank One Pension scheme on September 6, 2015 but the ex-serviceman said that it did not address their concerns and called it a “diluted” version.

Close to 2,000 medals were collected in a “Medal Wapsi” drive and given to the collector’s office in the national capital on the 149th day of protest.

The OROP was implemented after 40 years, yet protests continue.

In a statement given last week, Prime Minister Narendra Modi said the first installment of Rs 5,500 ($82) was paid towards OROP. So why are the ex-servicemen still unhappy?

“What has been implemented is not the actual OROP. It is at best an enhancement of the pension system. It is one rank five pensions and not one pension. The anomalies still hold; senior personnel will get lesser pension than their juniors. This kind of a system is legally wrong, unfair and constitutionally unacceptable. It’s authoritarian,” says Singh.

However, what has angered veterans the most is the proposal by the government to keep those who took “voluntary retirement” out of the scheme.

“A good 40 per cent of our serviceman retire early because the army demands a young force. Other countries like the US, Ukraine have acts for the defence services where the post-retirement needs of soldiers are taken care of. In India, most of those who join the army are from the villages. They get deployed for about 23 to 25 years and then are sent back to fend for themselves. They start farming or become security guards. If this is not arrogance and apathy towards the Indian soldier, what is it? We don’t protest for money but for justice and respect,” says Singh.

A serving Indian Air Force officer, not wanting to be named, says that the "political mileage parties try to gain” and “the government’s favouritism to bureaucracy” is the reason behind the skewed pension system.

“Much politics has been done around OROP. Sonia Gandhi favoured the demand but it was not implemented in the 12 years her party was in power. Same is with Narendra Modi, who promised OROP when he was campaigning to be prime minister. But under his government veterans were on the streets, demanding their rights. Everyone wants to keep bureaucrats thriving and defence under their thumb,” he says referring to the 1973 decision to increase the pension of civilian government employees from 33 per cent to 50 per cent and decrease that of the armed forces from 70 per cent to 50 per cent of the last pay drawn.

There are other armed forces too

The demand for OROP has also been raised by the paramilitary forces. But unlike India's army, navy and air force, these forces that include the Central Reserve Police force (CRPF), the Border Security Force (BSF) the Indo-Tibetan Border Police (ITBP), Central Industrial Security Force(CISF) and the Seema Suraksha Bal (SSB) were denied pension from  2004 and get a contributory pension instead.

There are over 1,300,000 paramiltary personnel embroiled in a larger debate. The government fails to recognise them as “armed force” and calls them “armed police forces”, and thus they do not receive several post-retirement benefits that the defence forces receive. There is also refusal to list these forces under the group of “organised forces”, a case set to be heard in India's Supreme Court in January 2017.

“We were always referred to as the paramilitary forces. The change in nomenclature done by the previous home minister P Chidambaram by passing an overnight rule is unconstitutional. As per article 246 of the Indian Constitution, our genesis is the same as that of the defence forces. The individual acts of paramilitary forces also prove our armed forces status. These are all acts in the constitution and a rule cannot surpass an act. The police is state subject and we are listed under the union,” says inspector-general (retd) of CRPF and chairman of National Coordination Committee of Ex-Central Paramilitary Forces Personnel Welfare Association, VPS Panwar.

The paramilitary forces do not receive special pensions like the Military Service Pay given to the army for conditions serving in adverse conditions.

“The BSF and ITBP are deployed in border areas with army cut-off from family and a social life in difficult terrain but while the army has perks of a military service pay, BSF and ITBP don’t,” says Panwar.

According to data provided by the National Coordination Committee of Ex-Central Paramilitary Forces Personnel Welfare Association, from the year 2009 to 2014, a total of 6,342 personnel have died in deaths attributable to working conditions, which includes 447 cases of suicide and 57 killed in cases of fratricide.

Though they have their own cadre, these forces are headed by Indian Police Services (IPS) officers. Many ex-paramilitary personnel say that the IPS officers fail to project the grievances of the forces they command and cite bureaucratic intervention as a problem.

According to data, in the last decade, 940 paramilitary personnel have been killed in action while 7,475 have received severe injuries.

“The central paramilitary forces should be granted the status and benefits of ex-servicemen, martyrs and war widows, which is currently denied. We fight the enemy from within and on borders, our call of duty should not be overlooked.” says Panwar.