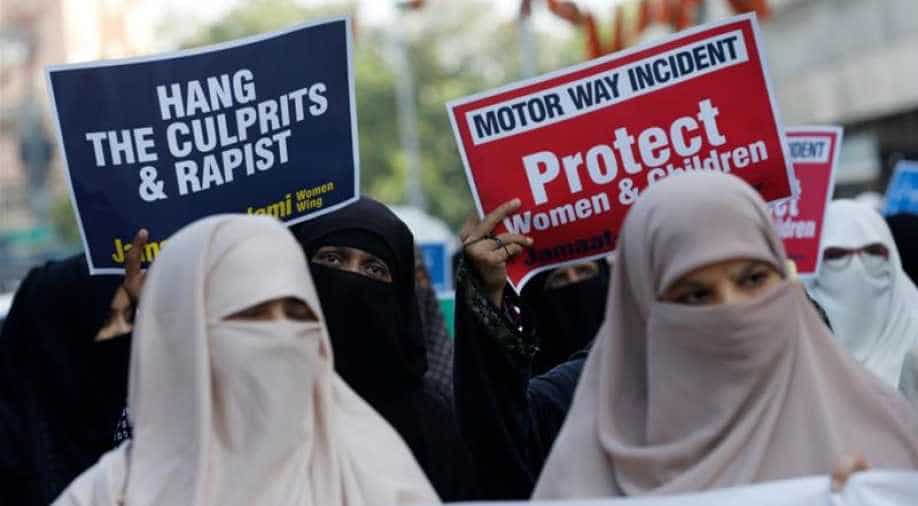 Two horrific incidents seem to have shaken the collective conscience of the civil society in the country.

Pakistan is witnessing a watershed moment.

Two horrific incidents seem to have shaken the collective conscience of the civil society in the country.

A five-year-old was raped and murdered in Karachi. And a mother of two was gang-raped in Lahore in front of her children.

Following this, there was a palpable outrage on the social media.

And adding insult to injury were insensitive remarks like 'Why did she take that route?'

This was said by the Lahore police chief Umar Shaikh. He had started his investigation by questioning the choices of the victim.

"Why didn't she take a diffrent route? Why didn't she check the petrol in her car? By saying this, my intention is not to paint her as the victim. I just want to remind them about the reality of our society. People with sisters and daughters should be cautious from now on," he further said.

"See, her family and husband are from france. She did what she did because she had france in her orientation," he added.

The reality is the victim's car broke down on a highway. She was driving home along with her two kids. She called her relatives and the highway police helpline. But before they could arrive, the woman was dragged out of her car by some locals.

She was then raped at gunpoint in front of her children.

The lahore police chief hasn't spoken a word condemning the ghastly crime since then. But instead is indulging in blatant victim-shaming.

Meanwhile, in Karachi, a minor was raped.

A five-year-old who stepped outside her house to buy biscuits was kidnapped. She was raped and then murdered.

Her body was found in a garbage heap two days later. The autopsy report reveals that the victim was hit in the head and set on fire.

There is massive public fury -- hundreds of women have hit the streets in Islamabad, and are demanding the police chief's resignation and a death sentence for the rapists.

There's outrage on social media as well. People are holding Imran Khan responsible for the worsening situation of women in their country.

They point out how their prime minister has failed to take action in previous cases of rapes. They want action this time not words.

"The protection of women is the first priority and responsibility of the government," Imran Khan said in response.

But this is the same person who once blamed Bollywood for the rapes.

So can anything be expected from him? No, we say.