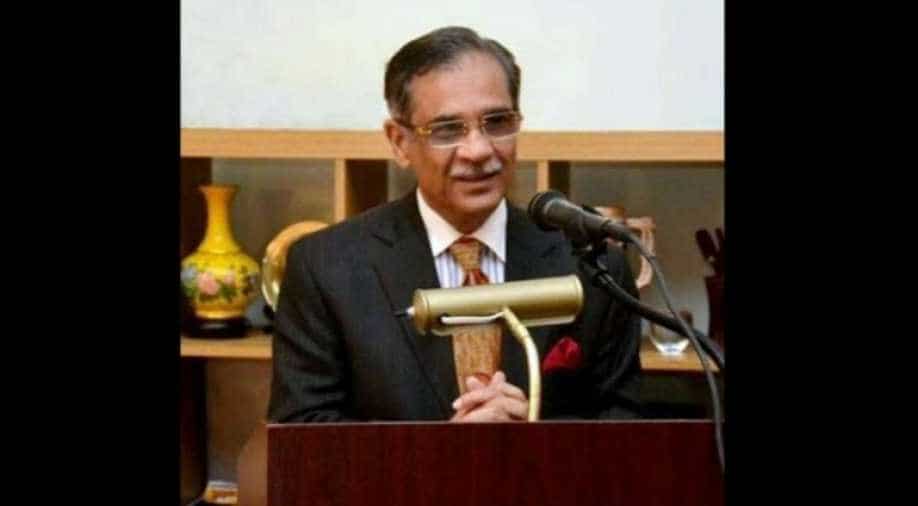 The outgoing chief justice passed several landmark judgments during his tenure as top judge including one which disqualified prime minister Nawaz Sharif in 2017 in a corruption case and the verdict in the blasphemy case against Christian woman Asia Bibi.

Chief Justice of Pakistan Saqib Nisar, who tried to cultivate the image of being the "people's judge" and known for his judicial activism, retired on Thursday.

The outgoing chief justice passed several landmark judgments during his tenure as top judge including one which disqualified prime minister Nawaz Sharif in 2017 in a corruption case and the verdict in the blasphemy case against Christian woman Asia Bibi.

Justice Nisar was sworn in as the top judge on December 31, 2016. Justice Asif Saeed Khosa will take over the reins of the Supreme Court of Pakistan on Friday when he will be administered the oath by President Arif Alvi.

A full court reference in honour of the retiring Chief Justice Nisar was held in the Supreme Court. I was attended by all Supreme Court judges ? with the exception of Justice Mansoor Ali Shah ? as well as Attorney General of Pakistan (AGP) Anwar Mansoor, retired senior judges as well as senior journalists, among others.

He said he tried to solve the issues plaguing sectors of health and education, both of which are rights granted to citizens by the Constitution.

"The job of judges is extremely difficult. Corruption within the judiciary is the murder of justice. I worked within the code of conduct for judges and it is my honour to have served the nation," he said.

Outlining his plan for his upcoming tenure as a top judge, Justice Khosa said that he will ensure the quick dispensation of justice.

Referring to Justice Nisar's efforts to raise donations to build the Diamer-Bhasha dams, Justice Khosa said that he too he wanted to build a dam. "I will build a dam against fake cases, against pending cases," he said.

"Currently there are 1.9 million cases pending in courts. Three thousand judges cannot dispense of so many cases," Justice Khosa noted.

He said the power to take Suo Motu notices will be used sparingly.

Speaking on the role of other courts, he said: "The trial of a civilian in a military court is considered wrong across the world. It is said that military courts take less time to issue verdicts. Civilian courts should try to resolve cases in a short period of time. High courts should exercise powers within their jurisdiction."

He said the army and intelligence agencies should not interfere in civilian matters.

Among Chief Justice Nisar's retirement plans are to open a "free legal clinic".

"I will offer free legal assistance to the oppressed, poor and helpless people at my free legal clinic," he said earlier in the day, after adjourning a hearing of his last case.

Justice Nisar will be remembered for populism and stretching the concept of judicial activism to its last limits. He took at least 43 suo motu actions on issues ranging from water shortages, health issues, exorbitant school fee, and encroachments.

He even organised seminars on how to control population which he termed as dangerous for the country.

He used media efficiently and his aides would send tickers and messages to journalists on the pattern of political leaders.

Justice Nisar took a keen interest in disputes of popular nature. For example, he led a campaign to build dams to store water and set up special accounts to collect donations.

His drive against encroachment was applauded as thousands of acres of land illegally grabbed by land mafia was vacated due to his efforts.

He was shrewd enough to know the limits of his power in a country where the military was a powerful institution and tried to avoid doing things which might have annoyed the army.