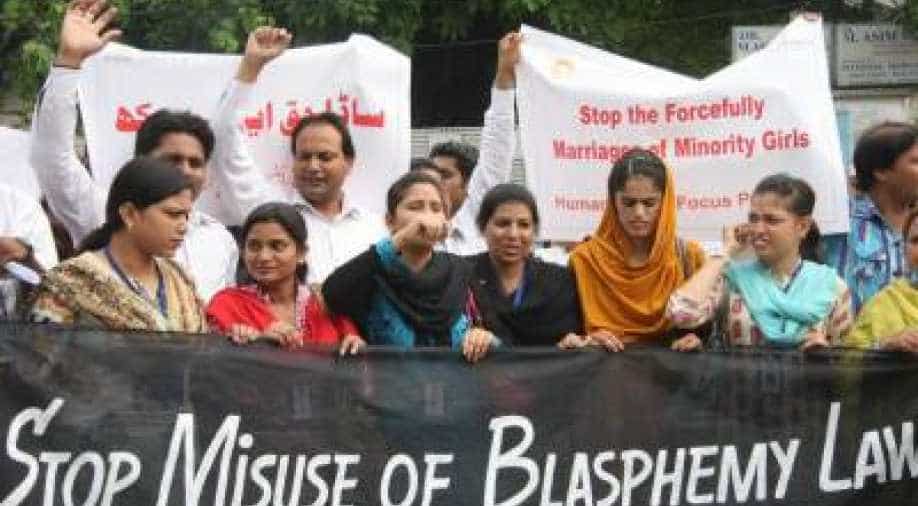 Minorities in Pakistan are severely charged on minor allegations, leading to punishments like the death penalty.

The condition of minorities is worsening in Pakistan and their numbers are declining by the day.

Minorities in Pakistan are severely charged on minor allegations, leading to punishments like the death penalty. Blasphemy laws, in most cases, are used to fulfill a personal vendetta.

Religious minorities are living a life under siege in Pakistan. The country's stance on them exposes its hypocrisy.

In February, Imran Khan issued a warning that anyone targeting the non-muslim population of Pakistan will be dealt with strictly. He declared that minorities are equal citizens of his country. However, his actions have fallen way short of his lofty words.

Since August 2018, after Imran Khan took power, at least 31 members of the minority community have been killed, 58 have been injured in targeted attacks and 25 blasphemy cases have been filed. At least seven places of worship for the minorities have also come under attack.

The Shia Muslims, Christians, Ahmadis, Hindus and Sikhs make up the minority community in Pakistan. All of them, without exception, have been targeted under Imran Khan.

According to one claim, at least 509 Shia Hazaras have been killed in violence since the 2012.

Under Imran Khan, at least 24 members of this community were killed last year.

In April last year, an attacker detonated a bomb at a vegetable market in Quetta. The target were the Hazaras.

The Christian community in the country has been perpetual sufferers of violence and discrimination.

Asia Bibi, a woman belonging to this community had spent almost a decade in prison on blasphemy charges before she was acquitted in 2018.

But, she couldn't leave the prison for weeks because in Pakistan religious leaders are above the law.

When hardlines laid seige to major cities in Pakistan, Imran khan was helpless before the radicals.

He couldn't ensure the safety of Asia Bibi and her five children in their own country and they had to be whisked out of Pakistan and took asylum in France.

The Ahmadiyya community represents less than one percent of Pakistan's population continue to be attacked. They boycott elections in protest.

Nearly 90 percent of Ahmadis in Pakistan's Rabwah boycotted the election in 2018.

So far, no leader has addressed their concerns. Their places of worship have been vandalised.

There are laws that make it illegal for Ahmadi Muslims to recite the Quran. They are also not allowed to have Islamic inscriptions on headstones or even call their place of worship a mosque.

Under Imran Khan, nothing has changed. The Ahmadis remain doomed. They face constant attacks.

In this year alone, a group stormed into a mosque. Local authorities could not do anything. So, the Ahmadis had to hand over their mosque to hardliners.

And there's no end to stories of the plight of Hindus and Sikhs in Pakistan.

According to the human rights commission of Pakistan, close to one thousand young Hindus and Christians are forced to convert to Islam every year.

Last year, a 19-year-old sikh girl was forced to convert to islam. She came back home after a 30-member committee of the Sikh community put pressure on the government.

Attacks on hindu temples are frequent. Last year, a large mob in Sindh vandalised a temple. This was after a Hindu principal was accused of blasphemy.

In the month of may, the Imran Khan government announced the formation of the national commission on minorities.

The cabinet decided to include the Ahmadis, only to drop them later. The Pakistani government faced a backlash, it had to keep the Ahmadis out.

So, Pakistan's minority commission has no representation from the Ahmadis. The minority group, that faces the most severe persecution in Pakistan. This case alone exposes Imran Khan's farce on minorities.