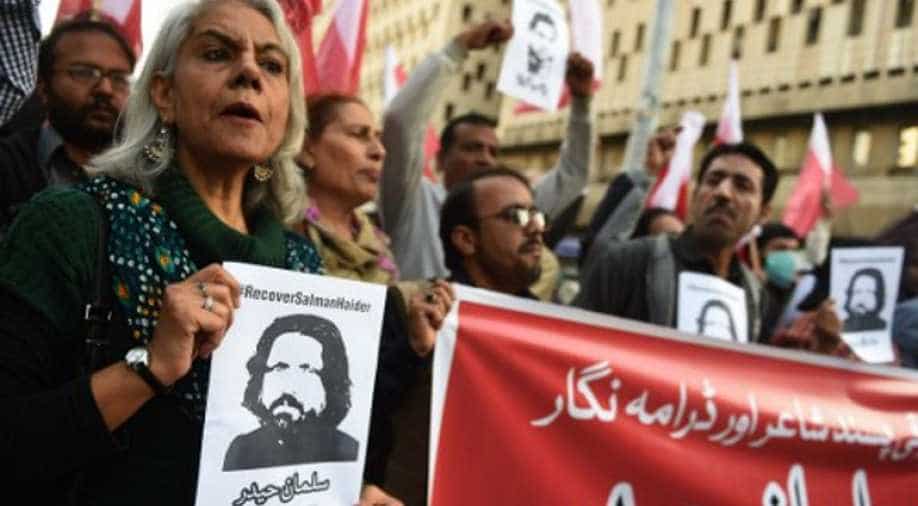 Social media activists have started to mysteriously disappear in Pakistan. In last one week, there is confirmation of five such activists going missing, with two of them picked up from the capital city of Islamabad, while the other three have been abducted from Punjab province. There are reports of others going missing too, but their families are yet to go public about them.

All of these ‘disappeared’ social media activists were known to be quite critical of Pakistan’s powerful army and its policies, especially with regards to religion and militancy. They managed Facebook and Twitter profiles that spoke freely of such issues facing the country. Such pages and accounts have now gone offline.

The missing activists that have yet been identified include Salman Haider, Asim Saeed, Ahmad Waqas Goraya, Ahmed Raza Naseer and Samar Abbas.

Social commentators believe that the civilian government of Prime Minister Nawaz Sharif is helpless in the face of powers that act above the law in Pakistan and maybe behind these disappearances.

“The civilian government is kept out of the picture, because this is something that happens under the surveillance of the deep state, which is effectively the army and the intelligence agencies, which are making fundamental decisions in this country,” says Pervez Hoodbhoy, a known intellectual, who teaches at a university in Pakistan.

Although the local mainstream broadcast media has remained largely silent on the issue, starting this week, activists have taken to the roads, and daily protests are being held in all major cities of Pakistan, to pressurise the government to recover them.

Some parliamentarians have also expressed concern and have demanded the government to look into the issue. They have filed a call for attention notice in the parliament, which states: “the pattern of these disappearances suggests that it is a planned and coordinated action, undertaken to silence voices which are critical of prevalent socio-political issues in Pakistan.”

Similarly, a few English newspapers have also dared to criticise these methods of the state. Daily Dawn in an editorial published on Tuesday called this ‘an ugly truth’. The strong-worded editorial highlighted how “a dark new chapter in the state’s murky, illegal war against civil society appears to have been opened.”

The interior ministry has reportedly obtained CCTV footage of the abduction of one of the activists, but the footage fails to identify the perpetrators and apparently the abductors' car registration number the authorities obtained from the visuals were also fake.

Following this crackdown, digital rights activists predict that Internet sphere, where liberals enjoyed almost unrestricted freedom in the country, will now be forced into the same style of self-censorship observed in Pakistan’s mainstream media, where openly discussing military affairs and religion is a taboo.

Pakistan ranks among the bottom 10 countries for supporting free speech, a global freedom of speech index recently revealed. In the past, journalists have often been beaten, kidnapped and even killed, allegedly by powerful state actors, but now the crackdown seems to be moving towards the digital media space too.

“The deep state has been resorting to methods which are not strictly according to law. They have been putting pressure on electronic and print media, and now it is the turn of the social media. Activists going missing was not new, but for social media this is the first time - the first attack,” says Senator Afrasiab Khattak, a renowned politician.

It is pertinent to note here that the Pakistani government is already known for actively censoring the Internet, and access to thousands of websites remain blocked in the country. Twitter, Facebook and YouTube have also been blocked in the past. However, many point to the dual policies of the government in this regard, given that pages that are pro-state but spew hatred against religious minorities and post-religious extremist content continue to operate freely.

“The unfortunate thing is, these activists were peaceful, patriotic citizens, but they were caught. On the other hand, you see jihadi leaders in the country, who are all over the place, speaking before big crowds, somehow the intelligence [agenices] do not seem to know anything about that,” Mr Hoodbhoy, the university professor points out.

Global human rights bodies including Amnesty International, Human Rights Watch and the United Nations have also issued statements condemning these abductions and have urged the Pakistani government to recover the activists.

“The Pakistani government has an immediate obligation to locate the missing human rights activists and act to ensure their safety,” said Brad Adams, Asia director of Human Rights Watch, in a statement on the organisation's website.

“The nature of these apparent abductions puts the Nawaz Sharif government on notice that it can either be part of the solution or it will be held responsible for its role in the problem,” the statement further adds.