Pakistan to host next round of peace talks between US and Afghan Taliban in Islamabad: Report 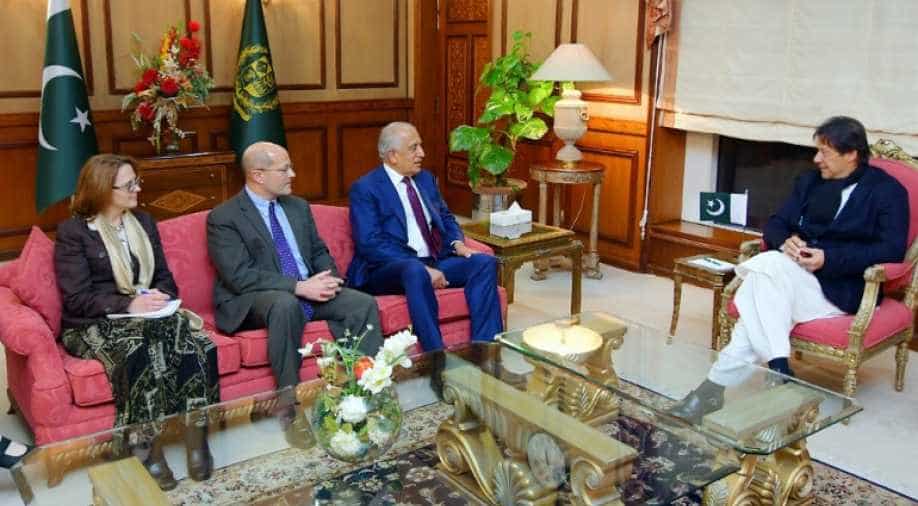 Quoting diplomatic sources, GEO News reported that Pakistan decided to extend an invitation to the Afghan Taliban representatives to come to Islamabad and hold talks.

Pakistan will host the next round of talks between the US and Afghan Taliban in Islamabad, it was decided on Friday during a meeting between Foreign Minister Shah Mehmood Qureshi and US special envoy for Afghanistan Zalmay Khalilzad, according to a media report.

Quoting diplomatic sources, GEO News reported that Pakistan decided to extend an invitation to the Afghan Taliban representatives to come to Islamabad and hold talks.

It is expected that Saudi Arabia, UAE and Qatar would also be part of the peace talks, it said.

The decision to hold the next round of talks between the US and Afghan Taliban in Islamabad was taken on Friday during a meeting between Qureshi and Khalilzad, the report said without giving a date for the negotiations.

US President Donald Trump has been pressing Pakistan Prime Minister Imran Khan to facilitate Afghan peace talks, with Washington reportedly making it a condition for a future summit between the two leaders in Washington.

During the meeting between Qureshi and Khalilzad, the US Special Representative for Afghanistan reconciliation, the Foreign Minister said that the Taliban were not willing to sit with the Afghan administration nor were they willing for a ceasefire, the report said.

Khalilzad requested that Pakistan should play its role to make the dialogue successful, it said.

Khalilzad, who arrived in Pakistan on Thursday from Kabul, as part of his four-nation tour, told Qureshi that the US leadership values Pakistan's efforts for peace and reconciliation in Afghanistan.

Khalilzad has held three round of talks with the Afghan Taliban to reach a settlement that would allow the US to withdraw its army and end a 17-year-old war,  America's longest.

Qureshi assured Khalilzad that Pakistan will continue its efforts to facilitate the Afghan-reconciliation process to bring peace and stability to the region.

"We have a shared responsibility to work towards bringing peace in Afghanistan," the minister said.

A US-delegation comprising the representatives of the State Department and Defence and National Security Council also attended the meeting.

Khalilzad is on his fifth visit to the region for Afghan reconciliation since he assumed office.

On Thursday, the US envoy met with Foreign Secretary Tehmina Janjua and discussed progress on the Afghan peace process.

India has been a key stakeholder in the peace and reconciliation process in Afghanistan and has committed aid worth $3 billion to the war-ravaged country.

New Delhi has also been pressing for an Afghan-owned and Afghan-led peace initiative to bring peace and stability in the war-ravaged country.

The Afghan peace initiative has been moving at a snail's pace due to refusal of the Taliban to sit for talks with the Afghan government officials.

The report of Pakistan may host the next round of Afghan peace talks came hours after a US Congressional report said that Islamabad may view a weak and destabilised Afghanistan as preferable to a strong and unified one.

"Pakistan may view a weak and destabilised Afghanistan as preferable to a strong, unified Afghan state (particularly one led by a Pashtun-dominated government in Kabul; Pakistan has a large Pashtun minority)," the report prepared by the Congressional Research Service said.

"Pakistan sees Afghanistan as potentially providing strategic depth against India, but may also anticipate that improved relations with Afghanistan's leadership could limit India's influence in Afghanistan," said the report titled, "Afghanistan: Background and US Policy in Brief".