Pakistan: Thousands rally for accused in US citizen murder case 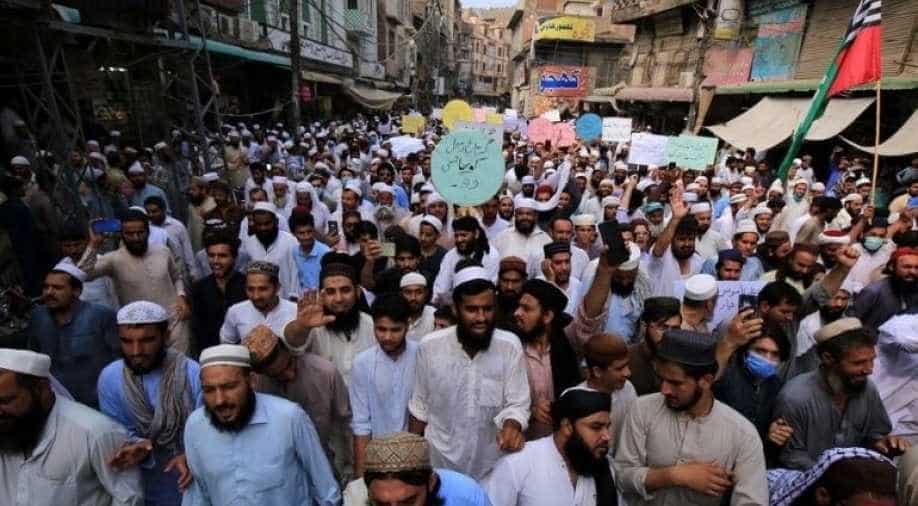 People in Pakistan rally for the accused in the murder of US citizen  Photograph:( AFP )

The demonstrators in Karachi were praising the accused for the killing, demanding his immediate release from jail and saying he did what was expected of the government.

Thousands of people in northwestern Pakistan rallied on Friday in support of the man who allegedly killed a US citizen inside a courtroom in the city of Peshawar.

The demonstrators in Karachi were praising the accused for the killing, demanding his immediate release from jail and saying he did what was expected of the government.

Also read | Welcome to Pakistan: A state where murder in courtroom is celebrated

"We are not in favour of taking the law into our own hands, but he did what the government should have done two years ago," said Mufti Shahabuddin Popalzai, who led the rally, told the news agency the Associated Press.

Tahir Naseem, a US citizen, was gunned down in a courtroom on Thursday during his trial for blasphemy.

He died before he was taken to hospital and the gunman was arrested.

On Thursday too, several people in the social media and politicians lauded the accused of committing the crime.

The US Statement also reacted strongly against the killing and asked Pakistan to reform "often-abused" blasphemy laws.

"We are shocked, saddened, and outraged that American citizen Tahir Naseem was killed yesterday inside a Pakistani courtroom," the State Department said, in a statement, on Thursday.

The statement also said the victim was "lured to Pakistan" from his home in Illinois and was entrapped by the controversial law.

"We urge Pakistan to immediately reform its often abused blasphemy laws and its court system, which allow such abuses to occur, and to ensure that the suspect is prosecuted to the full extent of the law," the statement said.

Naseem was facing a trial after it was alleged that he declared himself Islam's prophet.

The blasphemy law in Pakistan has been criticised a lot by human rights activists and other nations, which even result in a death sentence.

Also, often, the mere allegation of insulting Islam has led to vigilantes and mobs brutally killing the accused.