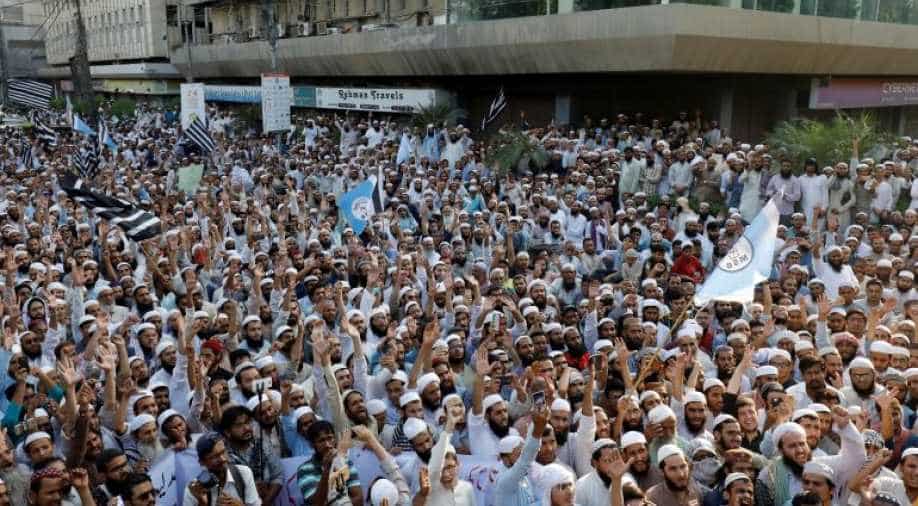 Pakistan Army on Friday called for an end to the ongoing standoff staged by Islamist hardliners and asked the protesters not to test its patience.

Pakistan authorities on Friday suspended mobile phone networks across major cities amid protests over the acquittal of a Christian woman facing the death penalty for blasphemy, news agency Reuters reported.

Unrest gripped the country for the third consecutive day as Islamist groups protested the Supreme Court's order in favour of Asia Bibi, a mother of five, ordering her freed.

Meanwhile, Pakistan Army on Friday called for an end to the ongoing standoff staged by Islamist hardliners and asked the protesters not to test its patience.

Army spokesman Major General Asif Ghafoor told state-run channel PTV that a government team, including a representative of ISI was holding talks with the protestors.

"We have shown patience. We have no link with the case (of Bibi) but we want that justice should prevail. We also want that the Army should not be forced to take action (against protestors) which it is empowered under the law to take," he said.

So far there were no reports about the success of negotiations despite indications by the officials that a breakthrough might be reached, news agency PTI reported.

The apex court's judgement, which was pronounced last Wednesday, triggered protests across Pakistan with protestors led by Islamic political party Tehreek-i-Labaik Pakistan and other groups blocking major highways and roads in different parts of the country.

Some of the major Pakistani cities, like Lahore, Islamabad, Karachi among others, were affected by the protests and witnessed roadblocks over past three days.

In Karachi alone, roads and junctions were blocked at 22 locations in the six districts of the city.

The education institutions were closed in Punjab, while private schools were closed in Khyber-Pakhtunkhwa provinces as well as in cities like Karachi and Islamabad. Many universities across Pakistan announced the cancellation of papers due to the ongoing tense situation, PTI reported.

"There is a disruption in public transport due to which labourers are unable to reach their workplaces. Truckers are also reluctant to carry goods which have led to production losses and shipment delays," an industry leader was quoted by PTI.

Pakistan's Federal Minister for Information and Broadcasting Fawad Hussain on Friday took to Twitter stating that negotiations with the protesters continue and that there is no cause to panic.