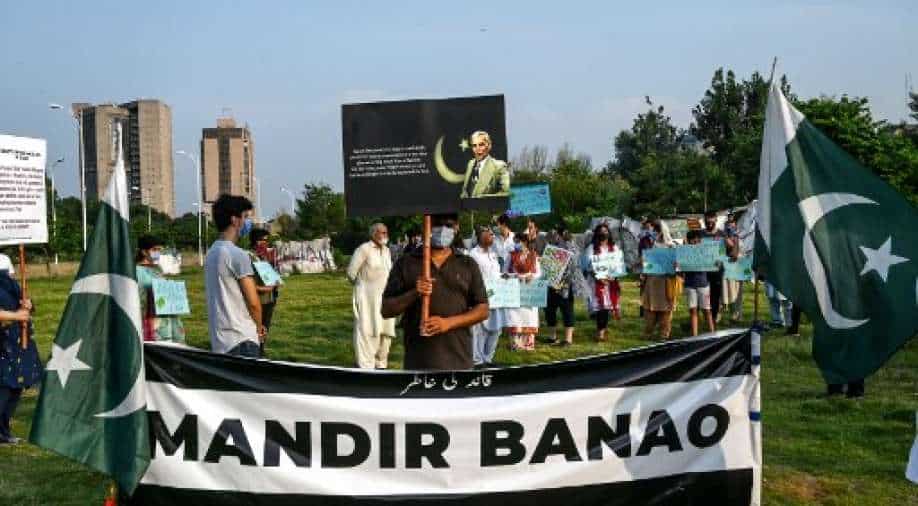 Demonstrators hold placards during a protest in Islamabad Photograph:( AFP )

After facing backlash, officials in Pakistan’s Islamabad city have restored a land for the construction of a temple for the minority Hindu community.

Islamabad’s Capital Development Authority (CDA) was severely criticised after it told Islamabad high court, during a hearing, that the allotment for the construction of capital’s first Hindu temple has been cancelled, the Dawn newspaper reported on Tuesday.

Four kanals (0.5 acres) of land was allotted to the community in 2016 for the construction of the first-ever Hindu temple, cremation and community centre.

The CDA said it had to cancel its order following an outcry from the public.

CDA’s counsel Javed Iqbal told the court that the civic agency had already cancelled the plot for the Hindu community in February this year for not starting construction on it.

According to officials, they were following a decision of the government which directed that the allotments of all lands issued to various offices, universities and other institutions on which no construction work had been started to be cancelled.

The officials claimed that they misinterpreted the government’s order and that they ordered to restore the land after it was apprised of the matter.

“We hope this clarifies the confusion the land alloted (sic) to the temple stands valid,” the CDA said in a tweet, along with a notice that showed the notification was withdrawn by the agency.

In July last year, radical Islamist groups had criticised the government for its intention to build a Hindu temple with government funding, following which the CDA had stopped the community from constructing the boundary wall around the plot.

However, the matter was resolved in December when the city managers issued permission to the community to raise the boundary wall around the proposed site.