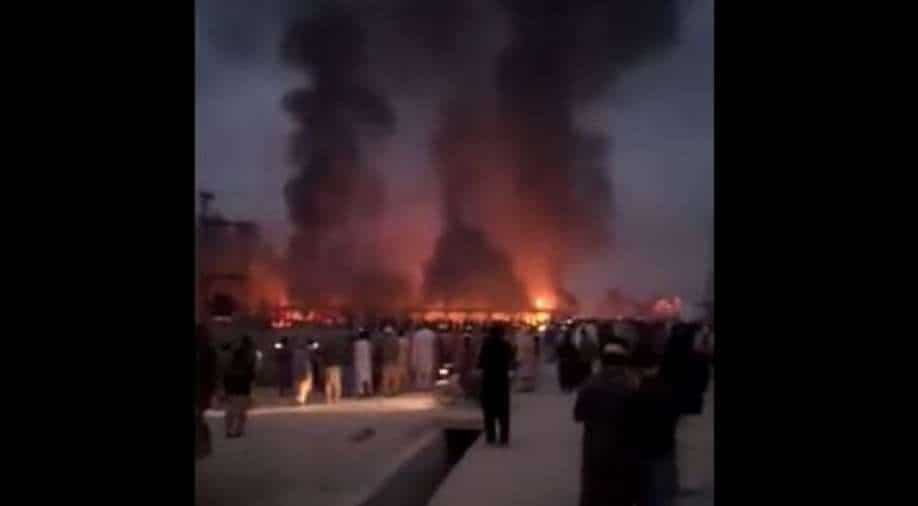 When the police refused to comply with their demands, additional individuals joined the crowd, causing greater unrest and an attack on the police station. Photograph:( Twitter )

Blasphemy is a highly sensitive issue in deeply conservative Pakistan where mere allegations have led to extrajudicial killings and mob violence.

On Sunday, a mob assaulted and set fire to a police station in the Charsadda region of Khyber Pakhtunkhwa, demanding the release of a man imprisoned for allegedly desecrating the Holy Quran.

To disperse an angry throng that vandalised a police station, authorities resorted to firing into the air and teargas shelling, injuring at least one individual.

Mob outside Mandni police station in Tehsil Mangi, Charsadda, baying for blood of a man who has a MENTAL ILLNESS and allegedly tore off pages of Islamic holy scripture. #Charsadda #blasphemy
[Videos via @AbdullahMomandJ ] pic.twitter.com/zRod6iurNL

A violent mob setting fire to Mandni Police station in reaction to an alleged blasphemy in Tehsil Tangi of #Charsadda.

The blasphemy law will burn down the sanity of this country.pic.twitter.com/CUoKmzK6Zn

The officers left the station and fled.

Local leaders of the Jamiat Ulema-i-Islam-Fazl held a protest march at Mandani market later that day, demanding that the accused be punished.

Blasphemy is a highly sensitive issue in deeply conservative Pakistan, where mere allegations have led to extrajudicial killings and mob violence.

Human rights campaigners have long sought the repeal of blasphemy laws, arguing they are used to victimise religious minorities or settle personal scores.

From 1987 to December 2020, at least 1,855 persons have been alleged under the offences related to religion, mostly under Sections 295B, C to 298C, of the Pakistan Penal Code known as Blasphemy laws.