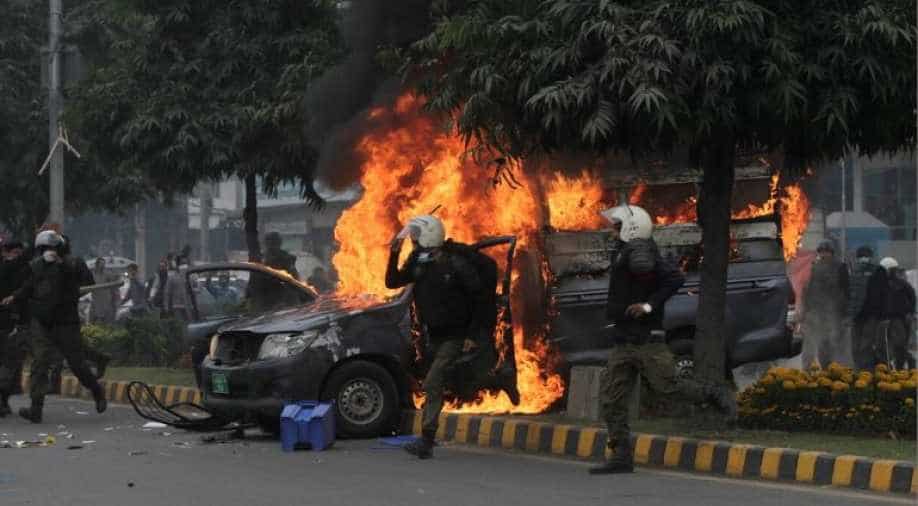 Police officers run past a vehicle on fire after a group of lawyers stormed the Punjab Institute of Cardiology (PIC) in Lahore Photograph:( Reuters )

More than 100 lawyers stormed and ransacked a hospital in Pakistan on Wednesday to avenge what they said was an assault by doctors there on a fellow advocate, and an elderly patient alongside two others died during the disturbance, authorities said.

Some of the protesters fired gunshots and pelted arriving police with stones and bricks, according to a hospital doctor, Ashraf Nizami. Several lawyers were arrested, police said.

"It was catastrophic for hours," Nizami said, adding that a 70-year-old female patient had died, and several patients were left unattended for hours, during the violence.

Lahore government official Kamran Ali said the lawyers were enraged over what they said was the beating by doctors of a lawyer at the hospital over his refusal to get in a queue of patients.

He said the lawyers were particularly angry about the doctors disseminating a mobile phone video on social media showing the beating.

The mob also roughed up provincial information minister Fayaz-ul-Hasan Chauhan when he got to the scene and tried to negotiate with the lawyers.

Prime Minister Imran Khan's office launched an investigation into the incident. "It is a shame that some people would go and attack a hospital," his spokesman Nadeem Afzal Chan said.