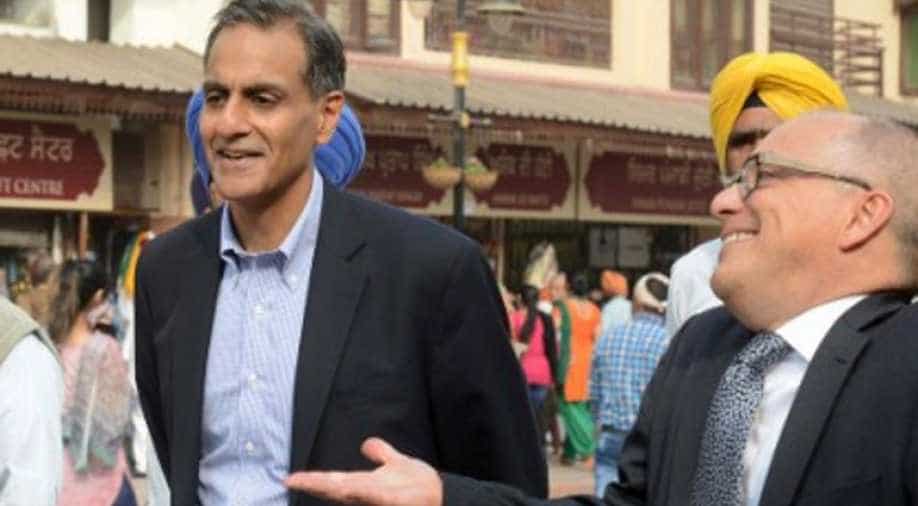 The envoy, who is stepping down from the post before Republican Donald Trump takes over as American President on January 20, said the US has been strongly supporting India's bid at the NSG. Photograph:( AFP )

A day after China came out strongly against the Obama administration on India's NSG bid, outgoing US envoy Richard Verma today exuded confidence that the Donald Trump government would be able to overcome the Chinese hurdle.

Verma said President Barack Obama, Secretary of State John Kerry and a lot of other people had worked in pushing India's membership to the elite Nuclear Suppliers Group and that the US will continue to work on it.

China had yesterday said admission of non-NPT signatories in NSG cannot be a "farewell gift" for countries to give to each other. The Chinese reaction had come after the Obama administration asserted that Beijing was an "outlier" in the efforts to make India a member of the elite nuclear club.

"This is something we will keep working on together. There is a lot of support for India's membership as we said we strongly support India's accession in the NSG.

"These things are complicated, they take time, they are multilateral. We will have to continue to work with those countries including China which may have some concerns. But I believe, at the end of the day, we we will get there," Verma said.

The envoy, who is stepping down from the post before Republican Donald Trump takes over as American President on January 20, said the US has been strongly supporting India's bid at the NSG and other export control regimes besides its membership at a reformed UN Security Council and other international institutions.

"All of these things have been very very important for President Obama and I belive they will continue to be top priority (of the Trump administration)," he told reporters on the sidelines of an event here.

China has been blocking India's membership bid for the 48-member grouping despite backing from majority members on the grounds that India is not a signatory to the nuclear non-proliferation treaty (NPT).

"I just want to point out that NSG membership shall not be some kind of (a) farewell gift for countries to give to each other," a Chinse Foreign Ministry spokesperson said yesterday, taking a dig at the Obama administration.

China is advocating a two-step approach for admission of countries who have not signed the NPT.

As per the new stand announced by Beijing, it first wants to find a solution that is applicable to the admission of all non-NPT countries followed by discussions on admitting specific nations.

Besides India, China is also interacting with Pakistan on the issue as Islamabad too applied for NSG membership after India.