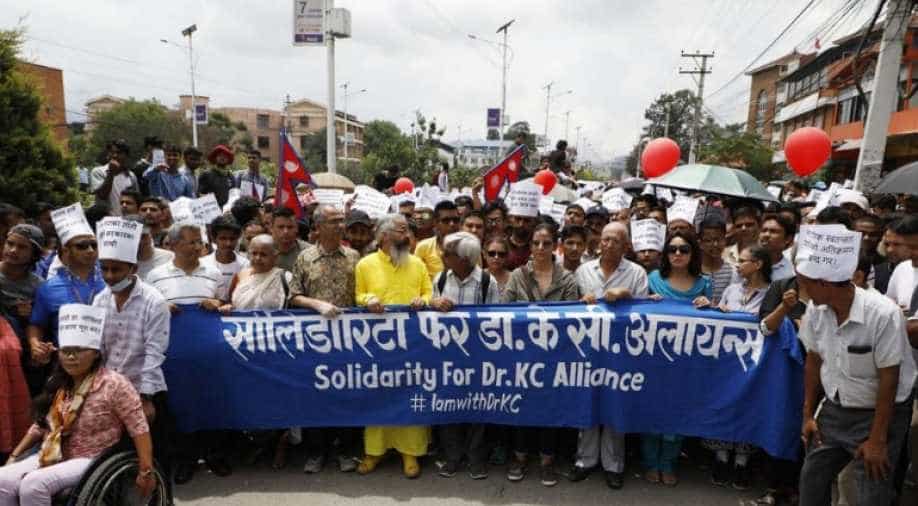 Nepal's doctors shut hospitals across the country on Friday, demanding that the government accept the demands of Dr KC.

Nepal's prominent surgeon and activist Dr Govinda KC, who was on fast-unto-death for nearly a month demanding reforms in the country's health care and medical education system, ended his 16th hunger strike on Friday after parliament endorsed a controversial medical education bill without necessary amendments sought by him.

The 61-year-old senior orthopaedic surgeon was on a hunger strike for 24 days demanding reforms in the medical sector through amendment to a medical bill, which was tabled by the ruling Nepal Communist Party in parliament.

He ended his hunger strike a day after the upper house of parliament endorsed the controversial National Medical Education Bill without necessary amendments.

While announcing his decision to end the hunger strike, Dr KC said him continuing the strike would disrupt health service delivery and affect the general people.

Nepal's doctors shut hospitals across the country on Friday, demanding that the government accept the demands of Dr KC.

The Nepal Medical Association on Friday called doctors across the country to shut down all the general services except emergency, depriving patients of health services.

The fasting doctor warned that he would stage the 17th hunger strike again if his demands were not fulfilled by the government.

He lashed out at Prime Minister Oli accusing him of betraying not only the Mathema report that recommended reforms in the country's medical education but also the entire 30 million Nepali citizens.

Dr KC told media persons that he would continue his struggle against the policy-level corruption that has gripped the medical education sector.

The surgeon also slammed the government for being insensitive on reforming medical education sector and legalising malpractices for commercial gains.

I will fight until I initiate reform in the medical education sector, he said prior to being transferred to TUTH Intensive Care Unit for further treatment.

The doctor's demands include healthcare services for poor people in remote regions and an end to the commercialisation of medical education.