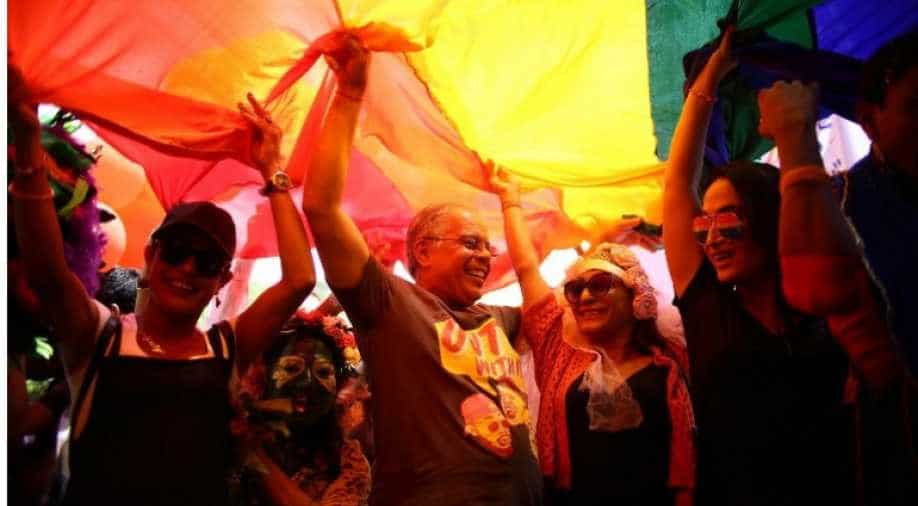 More than 900,000 of Nepal's roughly 26 million population identify as a sexual minority, according to LGBT rights group Blue Diamond Society.

Nepal was hailed as a leader in LGBT rights when it became the first country in conservative South Asia to recognise a third gender and assure equality for its sexual minorities.

But more than a decade later, that trailblazing reputation has lost its lustre, with gay and transgender Nepalis still confronting obstacles to jobs and schools, and marriage equality a distant prospect.

More than 900,000 of Nepal's roughly 26 million population identify as a sexual minority, according to LGBT rights group Blue Diamond Society.

On paper, they enjoy some of the most progressive protections and rights guaranteed by law in the immediate region.

Landmark reforms in 2007 prohibited discrimination on the basis of sexual orientation and recognised gay Nepalis at a time when homosexuality was still illegal in neighbouring India.

Transgender Nepalis identifying as neither male nor female was also granted the right to tick "other" when voting or applying for a passport or other official documents.

But gay and transgender Nepalis and rights activists say action has not matched the rhetoric, and more than a decade on, the community still faces discrimination.

"The government recognised our identity but has not been able to put forward a concrete policy or plan to give us rights that all citizens enjoy," said Blue Diamond Society president Pinky Gurung.

"It is heartbreaking that to enjoy one right (citizenship), we have to be deprived of other opportunities."

Rukshana Kapali, a transgender woman, has been allowed to study at university but not formally register as a student because her high school transcript identifies her as male under a former name.

The bureaucratic glitch means she may not be able to graduate.

"I want to be a linguist, but right now I am worried I won't be able to study here at all."

Tribhuvan University, Nepal's oldest, says it hopes to find a solution but until then, Kapali is off the books.

"We are optimistic, but it is not possible to register her under the current regulations," said Pushpa Raj Joshi, the university's exam controller.

Every year, Nepal's LGBT community take to the dusty streets of the capital Kathmandu for a vibrant gay pride parade to demand an end to all forms of discrimination.

Despite much-celebrated gains, there is still plenty to shout about.

Nepal in August adopted a new civil code defining marriage as between a man and a woman, dashing hopes for same-sex unions to be legally recognised any time soon.

Other laws in the new statute have also been criticised for narrowly defining core rights in terms of male and female -- leaving no room for people of the "other" gender.

"We were hoping for change so we could marry and maybe even start a family. But we've been disappointed so far," said Armand Rana, 23, a gay man who lives with his partner of six years.

Rana's family has accepted his partner but many in conservative and patriarchal Nepal still hide their sexuality and gender identity.

"The amount of progress Nepal has experienced... is enormous, and yet implementation of the various pledges from government entities over the years continues to lag," said Kyle Knight of Human Rights Watch.

The government says it is working to make laws more inclusive.

"If any law discriminates, people can point it out so we can seek ways to improve," said Bharat Raj Sharma, who oversees LGBT issues at the Ministry of Women, Children and Senior Citizens.

But for transgender citizens like Kapali, the wheels of Nepal's bureaucracy are turning too slowly.

"Being recognised as a third gender is important and I am proud of my identity," she said.