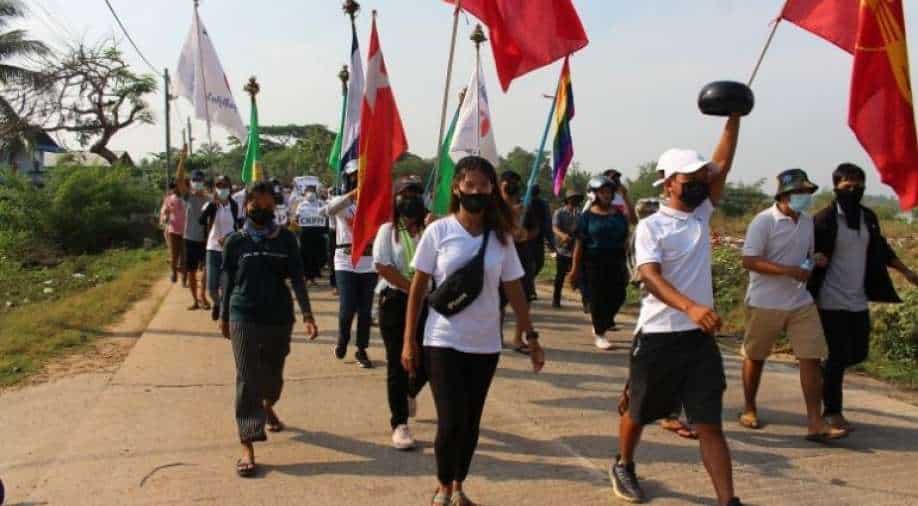 University students, engineers and teachers along with others march as they protest against the military coup in Dawei, Myanmar April 4, 2021 in this picture obtained from social media Photograph:( Reuters )

As a response to Myanmar military junta's internet shutdown, the youth in the country is running an underground newsletter that is being secretly distributed across communities. As per monitoring group NetBlocks, there have been internet outages in coup-hit Myanmar.

Thirty-year-old Lynn Thant, not his real name, started the underground newsletter and gave it the edgy name Molotov to appeal to young people.

"This is our response to those who slow down the flow of information -- and that's a threat to us," he told AFP.

Thousands of readers across the country are downloading the PDF version of the publication and printing out and distributing physical copies across neighbourhoods in Yangon and Mandalay and other areas.

Lynn Thant is conscious of the risks involved.

Local monitoring group Assistance Association for Political Prisoners has said that Police and soldiers have arrested more than 3,000 people since the coup.

Two hundred high-profile celebrities including actors, singers and social media influencers are on an arrest warrant list and could face three years' jail if convicted of spreading dissent against the military.

"If we write revolutionary literature and distribute it like this, we could end up in prison for many years," he said, his face concealed by one of the Guy Fawkes masks popularised by the dystopian movie "V for Vendetta".

Thant said the publication had a reach of more than 30,000 people on Facebook so far and the main audience was Generation Z activists.