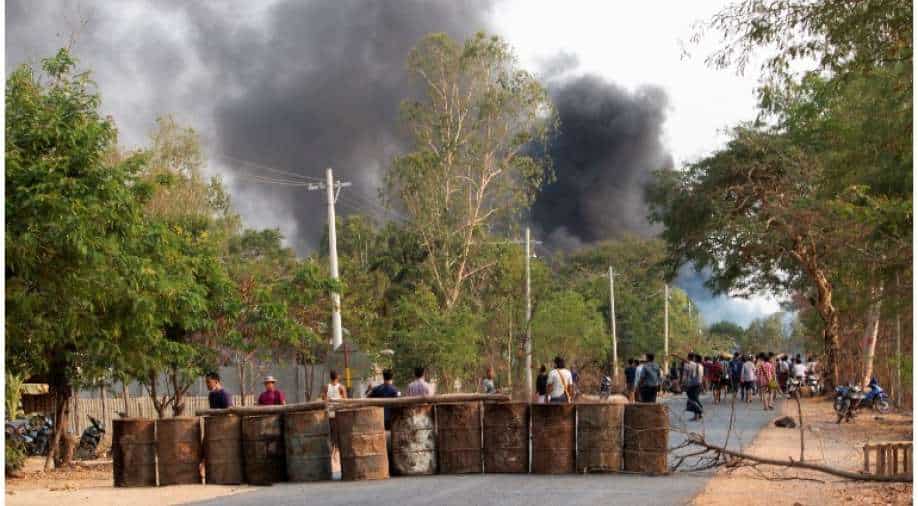 FILE PHOTO: Demonstrators are seen before a clash with security forces in Taze, Sagaing Region, Myanmar April 7, 2021, in this image obtained by Reuters Photograph:( Reuters )

As per witnesses, the security forces piled up the bodies in Zeyar Muni pagoda compound in the town of Bogo, 90 km northeast of Yangon

Myanmar's security forces on Friday fired rifle grenades at protesters and killed more than 80 people as per a monitoring group. As per the Assistance Association for Political Prisoners (AAPP) monitoring group and a domestic news outlet, the horrific killings took place near Yangon.

As per witnesses, the security forces piled up the bodies in Zeyar Muni pagoda compound in the town of Bogo, 90 km northeast of Yangon.

The AAPP and Myanmar Now news outlet said on Saturday that 82 people were killed during the protest against the February 1 military coup in the country. Firing started before dawn on Friday and continued into the afternoon, Myanmar Now said.

"It is like genocide," the news outlet quoted a protest organiser called Ye Htut as saying. "They are shooting at every shadow."

As per social media posts, many residents of the town have fled.

AAPP, which has maintained a daily tally of protesters killed and arrested by security forces, has previously said 618 people have died since the coup.

That figure is disputed by the military, which says it staged the coup because a November election won by Aung San Suu Kyi's party was rigged. The election commission has dismissed the assertion.

Junta spokesman Major General Zaw Min Tun told a news conference on Friday in the capital, Naypyitaw, that the military had recorded 248 civilian deaths and 16 police deaths, and said no automatic weapons had been used by security forces.