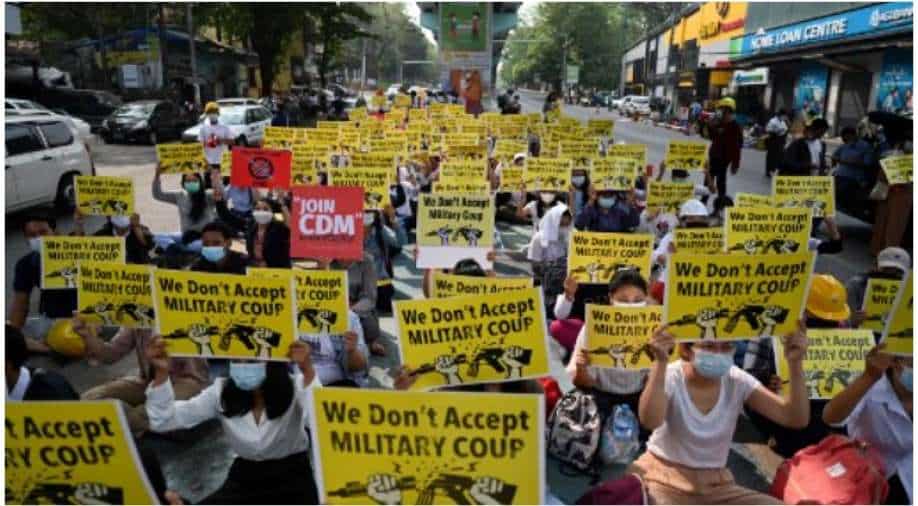 Protesters hold up signs during a demonstration against the military coup in Yangon on February 18, 2021 Photograph:( AFP )

Chaotic situation post-military coup in Myanmar did not show any signs of normalcy on Thursday. Myanmar's military junta issued arrest warrants against six celebrities while anti-coup hackers targetted government websites. The celebrities face allegations of encouraging strikes that have paralysed many government offices. Nearly 500 people have been arrested so far. The army announced late on Wednesday that six celebrities, including film directors, actors and a singer, were wanted under an anti-incitement law for encouraging civil servants to join in the protest.

The charges can carry a two-year prison sentence.

"It's amazing to see the unity of our people. People's power must return to the people," actor Lu Min posted on his Facebook page.

Students were also due to gather in a different part of the city to protests against the Feb. 1 coup and detention of elected leader Aung San Suu Kyi. The street marches have been more peaceful than bloodily suppressed demonstrations in a previous half-century of army rule, but they and the civil disobedience movement have had a crippling effect on much official business.

In the second-biggest city of Mandalay, protesters rallied to demand the release of two officials arrested in the coup.

Civil servants are striking and there are no signs of the strike easing in spite of appeals from military junta to resume work.

"We are fighting for justice in Myanmar," the group said on its Facebook page.

"It is like mass protesting of people in front of government websites."

Cybersecurity expert Matt Warren from Australia's RMIT University said it was likely the aim was to generate publicity.

"The sorts of attacks they would be undertaking are denial of service attacks or defacing websites which is called hacktivism," he told AFP.

"The impact will be potentially limited but what they are doing is raising awareness."

Internet access was severely curtailed for the fourth night running at about 1:00 am on Thursday (1830 GMT Wednesday), according to NetBlocks, a Britain-based group that monitors internet outages around the world.

It said connectivity had dropped to just 21 per cent of ordinary levels and was restored eight hours later ahead of the start of the working day.

"The practice is detrimental to public safety and incites confusion, fear and distress in difficult times," NetBlocks tweeted.